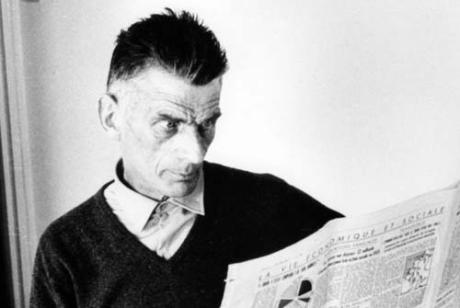 His troubles had begun early. To go back no farther than the vagitus. It had not been the proper A of international concert pitch, with 435 double vibrations per second, but the double flat of this. How he winced, the honest obstetrician, a devout member of the old Dublin Orchestral Society and an amateur flautist of some merit. With what sorrow he recorded that of all the millions of little larynges cursing in unison at that particular moment, the infant Murphy’s alone was off the note. To go back no farther than the vagitus.
His rattle will make amends.

Winking seductively at me from the Oxfam shelf was Samuel Beckett’s Murphy, his first novel, in an elegant Calder & Boyars reprint from the 1970s. (Also available for a penny from Amazon.) I had read it before, but it must have been nearly 30 years ago, so I thought I would refresh my memory by reading it again… Oddly (for a reader as forgetful as me), I had remembered most of what is good in it, and forgotten most of what is not. The good in it – and it’s very good – is mostly that which foreshadows Beckett’s future work and shows glimmers of his genius: essentially Murphy himself, as distinct from the strenuous comic novel in which his travails are embedded.

I had remembered the opening sentences: ‘The sun shone, having no alternative, on the nothing new. Murphy sat out of it, as though he were free, in a mew in West Brompton…’ I had remembered the rocking chair in which he sat, naked and bound, striving to achieve his peculiar form of oblivion, as described in the great Chapter Six, which begins: ‘It is most unfortunate, but the point of this story has been reached where a justification of the expression “Murphy’s mind” has to be attempted. Happily we need not concern ourselves with this apparatus as it really was – that would be an extravagance and an impertinence – but solely with what it felt and pictured itself to be…’ Which is ‘as a large hollow sphere, hermetically closed to the universe without’.

His efforts to disconnect himself from his body having set him ‘more and more free in his mind, he took to spending less and less time in the light, spitting at the breakers of the world; and less in the half light, where the choice of bliss introduced an element of effort; and more and more and more in the dark, in the will-lessness, a mote in its absolute freedom. This painful duty having been discharged [the chapter ends] no further bulletins will be issued.’

The future Beckett is also prefigured in the unappealing shape of Collins, the near-mute factotum and go-between who is unable to remove his hat or to sit – he can only stand or lie, until a mysterious transformation towards the end. By then, even their creator seems fed up with Murphy’s supporting cast and their doings. ‘So all things limp together for the only possible,’ he writes wearily.

The novel is most fully alive when Murphy finds his ideal job (having hitherto resisted work of any kind) – caring for the inmates of the Magdalen Mental Mercyseat. Here Murphy is in his element; here he meets the superb lunatic Mr Endon and plays the great game of chess which is fully notated, with commentary (this I had remembered too, and it is very funny) – and here Murphy meets his inevitable end. Except that he was to return to life in some form or another throughout Beckett’s subsequent works, while the comic novel apparatus that surrounds him – very Irish, very clever, sometimes to the point of impenetrability – fell away like the rocket that launches the spacecraft into orbit.