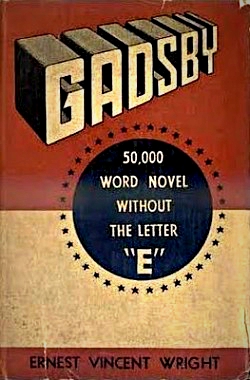 I think every English teacher I ever had must have mentioned this book at some point, but I had never got round to finding out anything more about it, until now…

Gadsby: A Story of Over 50,000 Words Without Using the Letter “E” is a novel written in 1939 by Ernest Vincent Wright. The novel is written as a lipogram and not one of the 50,110 words used contains the letter “e”. Though self-published and little-noticed in its time, the book is a favorite of fans of constrained writing and is a sought-after rarity among some book collectors.

The plot revolves around the dying fictional city of Branton Hills, which is revitalized thanks to the efforts of John Gadsby and a youth group he organizes.

Beginning around 1906 and continuing through WW1 and prohibition. Gadsby is divided into two parts. The first part (about 1/4 of the book’s total length) is strictly a history of the city of Branton Hills and John Gadsby’s place in it. The second part of the book devotes more time to fleshing out the rest of the town’s characters.

The novel is written from the point of view of an anonymous narrator, who continually complains about his poor writing skills.

Now, naturally, in writing such a story as this, with its conditions as laid down in its Introduction, it is not surprising that an occasional “rough spot” in composition is found”, the narrator says. “So I trust that a critical public will hold constantly in mind that I am voluntarily avoiding words containing that symbol which is, by far, of most common inclusion in writing our Anglo-Saxon as it is, today.

In his introduction to Gadsby, Wright states that “this story was written, not through any attempt to attain literary merit, but due to a somewhat balky nature, caused by hearing it so constantly claimed that ‘it can’t be done'”. He said he tied down the “e” key on his typewriter while completing the final manuscript. “This was done so that none of that vowel might slip in, accidentally; and many did try to do so!”

Wright’s primary difficulty was avoiding the “-ed” suffix for past tense verbs. He focused on using verbs that do not take the -ed suffix and constructions with “do” (for instance “did walk” instead of “walked”). Scarcity of word options also drastically limited discussion involving quantity, pronouns, and many common words. Wright was unable to talk about any quantity between six and thirty. An article in the linguistic periodical Word Ways said that 250 of the 500 most commonly used words in English were still available to Wright despite the omission of words with e.

Wright appears to have worked on the manuscript for a number of years. In October 1930, he wrote a letter to The Evening Independent newspaper, boasting that he had written a fine lipogrammatic work, and suggested the paper hold a lipogram competition, with $250 for the winner. The paper turned him down.

Wright struggled to find a publisher for the book, and eventually used a self-publisher. A 2007 post on the Bookride blog about rare books says a warehouse holding copies of Gadsby burned down shortly after the book was printed, destroying “most copies of the ill fated novel”. The blog post says the book was never reviewed “and only kept alive by the efforts of a few avant garde French intellectuals and assorted connoisseurs of the odd, weird and zany”. The book’s scarcity and oddness has seen original copies priced at $4,000 by book dealers.