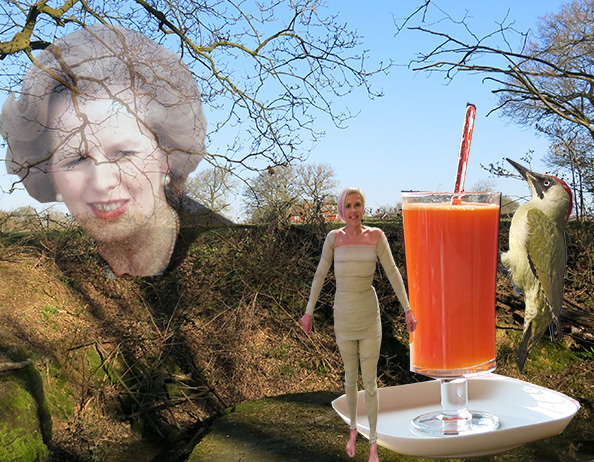 This week our intrepid style guru gets scrubbed, pummelled, prodded and poked on a trip to the countryside…

Where were you on the day Margaret Thatcher died? It may turn out to be one of those occasions you will never forget – like JFK’s assassination, the death of Princess Diana, 9/11 or 7/7.

I spent last week in rural West Sussex, not much more than an hour’s drive from where I live, though actually a world away. The bluebells aren’t flowering yet, but the daffodils, primroses and wood anemone are. I heard a woodpecker for the first time in years – and saw several… one right outside my window. I saw blue tits, buzzards, pheasants, and the fattest thrushes I have ever seen. I even watched a barn owl hunting for its prey.  There were plenty of sheep too, though I didn’t spot any lambs – I hope they haven’t perished in the freezing weather.

I visited an old railway station, now a private home, which was used in a 1957 BBC adaptation of the Railway Children. I stood on the remains of an ancient pagan temple. I was snowed on, rained on, enjoyed the sun streaming into my room, and got my wellies and walking boots thoroughly caked in mud.

I was staying at Alliblaster House, the venue for detox retreats, run by an organisation called Simply Healing. The early Victorian house, formerly a gentleman’s country residence, is a sprawling affair – full of cosy sitting rooms, log fires and the pervasive aroma of woodsmoke. The décor is chintz-meets-New Age circa 1985, with crystals, knick-knacks and artefacts from the owner’s travels to the spiritual epicenters of the globe liberally scattered throughout. The atmosphere is warm, homely, relaxing and unbelievably peaceful.

Here my body was scrubbed, pummelled, prodded, poked and bandaged up like a mummy. Meals for the week consisted mainly of fruit and vegetable juices, with a token salad on day seven. Every evening I sat down with my fellow inmates to a welcome cup of ‘potassium broth’ – vegetable soup with the vegetables removed. If that weren’t enough, there were colonic treatments too. The mind and soul were also treated to hypnotherapy, meditation and healing sessions – plus the occasional talk on a relevant subject.

A nutritionist told us about Jeanne Calment, the French woman who lived to 122. She took up fencing at the age of 85 and decided to give up cycling at 104. She remained in her own home in the south of France until she was 110, when a cooking incident, resulting in a small fire, signalled it was time to move into a nursing home.

Of course, she grew up in an era when junk food didn’t exist. Her freshly prepared food came from local markets, along with her cherished olive oil. She never worked, drank a glass of port every day and ate a kilo of chocolate every week. It also says on Wikipedia that she two smoked two cigarettes a day between the ages of 21 and 117.  Scientists discovered that Calment had a total immunity to stress. She did everything she wanted to in life and had no regrets. Her philosophy was ‘if you can’t do anything about it, don’t worry about it.’

I’m not sure I’d like to live to 122, unless all my faculties are still fully functioning. Margaret Thatcher had a good innings, though latterly not in the best of health. It’s a struggle for any of us to balance the demands of the modern world with a healthy regime for living. But I certainly feel a lot lighter in mind and body – and definitely healthier – after a re-energising week in the country.

10 thoughts on “A Week in the Country”