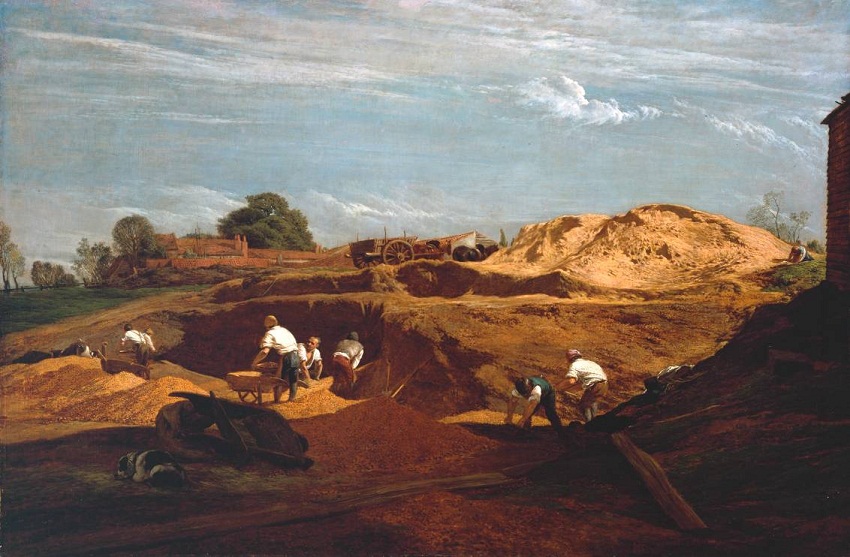 Nige reflects on a precocious talent, and his disappointing son-in-law…

I was up at Tate Britain, mooching among the rehung Romantics, when this very accomplished oil painting caught my eye. Its subject is Kensington Gravel Pits, and it was painted in 1811/12 – when Kensington was still a village surrounded by market gardens – by John Linnell, who would become the father in law of Samuel Palmer (represented in Romantics only by one very lovely mezzotint, Evening, engraved by one of the Ancients, Welby Sherman).

The most remarkable thing about Kensington Gravel Pits is that Linnell was only 19 or 20 when he painted it. It’s an extraordinarily assured piece of work for such a young artist, everything about it executed with absolute confidence. In particular, he is already displaying the masterly rendering of cloud and sky and bold effects of sunlight and shade (you have to see the original to get the richness of colour) that were to be his trademark for the rest of his long life, in the course of which he developed landscape painting into a hugely productive and profitable family business.

All his numerous brood were in various ways involved in the business, turning out landscape after landscape, typically with toiling figures, rolling (Surrey) hills and big skies. He ran this patriarchal, quasi-industrial enterprise from a hilltop mansion in Redhill, Surrey, close to the ugly Gothic villa he had bought for his daughter and that husband of hers who seemed incapable of making money from his talents – Samuel Palmer.

This Linnell is the same John Linnell who was the friend and patron of William Blake, and of Palmer and the Ancients, whom he introduced to Blake, thereby inspiring one of the great flowerings of English romantic art. But Linnell became the artistic equivalent of a Victorian industrial baron, while poor Palmer, a fish out water in his Reigate villa, looked down upon in every sense by his father in law, remained an Ancient all his life.