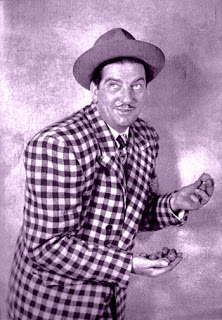 From the Big Apple to a ‘Bob Marley and the Wailers’ (a BMW), Jonathon looks at man’s mania for nicknaming…

Nicknames, eh? You gotta laugh. ‘Ali’ Barber, ‘Blanco’ White, ‘Shiner’ Bright, ‘Lackery’ Wood, ‘Queeny’ King, ‘Bodger’ Lees, ‘Ned’ Kelly, ‘Dusty’ Miller, ‘Bogey’ Harris, ‘Happy’ Day, ‘Hooky’ Walker, ‘Tug’ Wilson, ‘Wiggy’ Bennett … thigh-slapping stuff. I don’t know: does anyone get dubbed like this today? It was big in the army and thus the two world wars and Partridge has a whole section of what he calls ‘inevitable nicknames’ from which these are taken. But even though he includes ‘Dodger’ Green (though not Forties comedian Sid Field’s ‘spiv’ alter ego ‘Slasher Green’ – above) I don’t. Wodehouse was of course as gifted in this as in so much else; ‘Oofy’ Prosser, ‘Catsmeat’ Potter-Pirbright, ‘Boko’ Fittleworth, though even he is also driven back to simple first-name abbreviations. He, of course, was known as ‘Plum’ (from the ‘Pelham’ of P.G.).

Nicknames are actually eke-names, where eke stems from the Old English éaca, which meant a piece added on or a supplement. Earlier they were to-names, distinguishing, often job or place-related affixes  ‘added to’ the basic given, ‘Christian’ name and which became, linguistically and in practice, the surname. Like eke/nick, the sur- prefix meant ‘as well as’ but is complicated by its sometime synonymity with ‘family name’ and thus suggests an underpinning by ‘sire’ as in ‘sire-name’.  Whatever its past, by 1700 the nickname was sidetracked, as we can see, for allegedly humorous purposes only.

The US Mafia seems to keep up the tradition – Sammy the Bull, Three-Finger Brown, Joe Bananas, Louis Lump Lump, Nicky Nails, Abbadabba and of course Bugsy – but even these tend to the past. Back home we have, of course, the loathsome Posh and Becks, and football fans may be able to offer more. But please don’t; nor submerge me with the multitudinous names of clubs and grounds but kindly take them as read, if not written (I do seem to have The Den, but only as the 1820s Stock Exchange); indeed sport seems to be the final repository, but how many of those sobriquets exist outside the tabloid headlines? Test Match Special remains enthusiastic, perhaps the last repository of the ‘Oxford’ ‘-er’, although the RAF may have added the pendant ‘–s’ and either way I don’t remember the peerless Arlott answering to anything but ‘John’.

Cities like nicknames, especially if in America. Boston is Beantown, Detroit the Motor City, New York, less obviously the Big Apple (the debates over which title must be running into thousands of pages; such pages are the substance of individual careers but I definitely don’t go there) and so on. But some, surely, are down to nothing but optimistic and very localized boosterism. I can direct you to Wikipedia, wherein I foolishly ventured, and the lists are near-infinite, but if anyone outside the limits of Sylacauga, AL terms it ‘Marble City’, Corning, CA ‘Olive City’ or Tampa, FL ‘The Big Guava, then I can but admire their knowledge. (Though I may now commit to memory Canon, GA, self-named ‘The Big Gun’). The US also accords nicknames to local populations. Again, the list is too great, but I offer a flavour: Maine, Foxes; Indiana, Hoosiers; Illinois, Suckers; Mississippi, Tadpoles; Wisconsin, Badgers; Iowa, Hawkeyes; Oregon, Hard Cases. Not to forget the Georgia Cracker and, because Californians described them as being ‘vomited forth’ on their trek west, inhabitants of Missouri are known as Pukes. Of course Australia’s Queenslanders are banana benders, and natives of Canada’s Maritime Provinces herring chokers, so who’s to cast nasturtiums.

None of which is to absolve slang. I may have side-stepped the ‘inevitables’ but I do offer some nicknames house-room. This is not the place for the grosser forms of racism and nationalism, but many of those are in effect nicknames. Indeed, a great deal of slang, with its emphasis on the negative, and of slights and insults, can be seen as no more than ‘calling names’. But that is perhaps to stretch the point, and a count on ‘definition = nickname’ offers just 176 terms.

We have, for instance, our own urban titles. Brighton, now self-ordained ‘London-by-the Sea’ was once less ecumenically known as ‘Jerusalem the Golden’ from its large Jewish population (such aggregations also gave Mesopotamia and Asia Minor for Belgravia; the latter name also applied to Kensington, in this case for its population of ex-Indian Civil Service qui hais). I live near Silicon Roundabout, aka the Old Street roundabout, surely rivaled only by the Elephant and Castle (or ‘Arsehole’) as the least alluring such traffic nexus outside Spag Junction. The name, very diminuendo, waves longly at California’s Silicon Valley, as do Silicon Fen (Cambridge) and Silicon Glen (central Scotland).

For what remains I choose at random. Bob Marley and the Wailers, a BMW (also black man’s wheels), the chimney sweep, which was an aperient, known as ‘the black dose’ or ‘black drop’, composed mainly of opium and mixed with vinegar and spices (the name came from the colour and the fact that it ‘cleans one out’). Conky describes one who has a big nose, among whom was ‘Old Conky,’ the Duke of Wellington; a duck, from the Bombay duck, the bummalo (Harpodon nehereus), a small local fish, usually eaten dried as a relish, was a soldier serving in the Madras Presidency. Fag-Ash Lil smoked heavily and Filthy McNasty was a dirty old man (both lit. and fig.). Those known as Gammy limp, as Gassy talk too much and as Gig-lamps, immortalized in the four-eyed Kipling’s schoolboy nickname ‘Gigger’, wear glasses and may also be known as Goggles. Hot-lips is passionate, Lady Hot-bot, titled or otherwise, is a goer and hotshot Charlie thinks a good deal more of himself than do his acquaintances. Laughing boy is , slang having heavy hands, a depressive. My Lord (or His Honour) is used of a hunchback: the source is Greek lordos, bent backwards and thus the medical term lordosis, anterior curvature of the spine. Paddy, usually of course an Irishman, can also be an Asian – think paddy fields. And red is red-headed as is carrots, and porky is fat as is lardy and…

Enough. I can speak only for myself but I am unimpressed. Leaden puns, simplistic abbreviations: this is not the slang I know and love. I do, I admit, rather like  Barrister’s which was a locals’ name for a notorious late 19th century thieves’ coffee house. I have had dealings with lawyers this last year or so. I think it will soon be time to consider them.