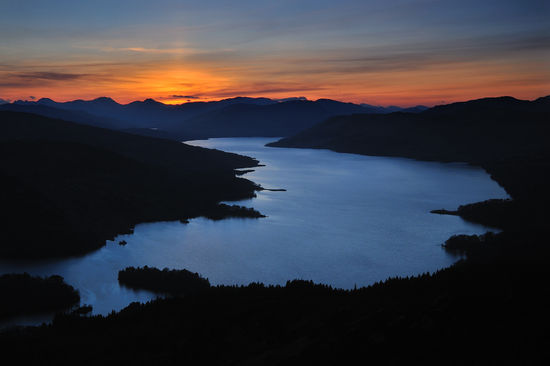 Malty recalls an eventful night in the Scottish Highlands…

The single track road running through Glen Torridon boasts some of the most majestic scenery in Britain, on its northern side and stretching the entire length of the glen are Beinn Eighe, home to numerous eagles, and Liathach the grey one, not so grey now, the quartzite cap lying in pieces around its feet. Both, while not as committing as their alpine counterparts, sport some magnificent climbing. The north side of Beinn Eighe has Coire Mhic Fearchair and the triple buttresses. Liathach has Corrie na Caime which has, when infrequently in condition, some fine ice climbing. Its ridge is no mean undertaking as many an intrepid fell-walker, ambition outweighing experience, has discovered. A number of them ending the day’s outing in Raigmore’s mortuary (comfort would have been found in the fact that the mortuary temperature is normally five degrees higher than that of the ridge). The glen’s western extreme ends at Beinn Alligin, the jewelled peak – from its flanks can be enjoyed some breathtaking views of the Western Isles.

Mid January, quite dry, the westerlies had ensured the usual lack of snow, returning from an evening visiting friends and enjoying the decadence of a West Highland pub we had noticed some Land Rover lights ahead (easily spotted: set close together like a lawyer’s eyes). Except these were different, one above the other. What! how much have we had, not that much surely? “It’s in the ditch, on its side” said my son. So there it was at midnight, lying at the bottom of a highland ditch, all pale blue and sad, steam issuing forth from the radiator, the local registration number giving a clue, another west coast tippler gone awry. Not knowing what to expect we ascended the stricken motor and attempted to open the door up-over, no mean feat on a dark cold moonless night. The subtle aroma that greeted us completed the story, a west coast tippling fisherman, lying at the bottom against the passenger door, the back of the Land Rover a jumbled mass of fishing stuff, the odd sou’wester, nets, buoys, lines, boxes and, judging by the smell, last week’s mackerel.

After some imaginative use of the driver’s feet, let’s call him Angus, we extracted him socks-first from the wreck. “Arghdinnawurrahpalmahmahmahahmallreet,” he said in between the puke and froth, as we sat him against the still warm sump. Then the penny dropped… “Er, dad, you going to let him in the back of the car?”…blank stare, worried frown, decision time. We gave him half an hour to complete the emptying process, washed him off with ditch water and bunged him in the back, on top of three 50 metre lengths up nine millimetre rope, six ice screws and several brace of crampons. He promptly fell asleep. “Must be the Indian mystic in him” said junior. Assuming that he had come from Torridon village, our destination, and the only premises still rocking at that time of night would be the bar, we carried him in to a rousing cheer: Angus it seems was a member. ‘Will ye no have a dram?’ was the chorus, as Geordies of course and therefore not English we were instantly in with in-crowd. After some enjoyable banter, copious quantities of Talisker and pork scratchings all round, Angus appeared to have rejoined the land of the living. “Aarghmaheidwhere’stheburd?” Stunned silence…. “Burd, what burd?” “Och, just the yank” said a voice from the gathering congregation, sensing an incident in the offing. “Was she in the car with you” I asked, “aarghahdinakenshewaspilatikyeken.” Oops, the good Samaritan within triumphed over the wimp without. Plod, blue lights, would you breathe into this sir, etc.

Up the glen once more we went, probably at that time the only people in the pub still in possession of a valid driving licence. Again we scaled the Land Rover, this time from beneath the smelly pile of fishy tackle could be heard the plaintive moaning of a burd, a ladybird, with what sounded like a deep southern drawl. Extracting the unfortunate lassie was a major exercise in logistics. She was big. Assuming the feet first position her lower construction popped out fairly quickly, her upper storey, above the plimsol line, was prominent in every direction and of an entirely different spacial occupation: wedged, jammed, well stuck, requiring large amounts of indelicate hands on treatment, ending with that time honoured technique ‘grab one each and heave’. Junior was literally ill with laughter. The extraction was accompanied by what seemed like the sound track from Cat on a Hot Tin Roof, Maggie at full volume, the f-word split asunder the stillness of the highland glen, cannoning around the highland peaks, stampeding the deer, the lady apparently was not amused.

Later back at the pub Capt Ahab was reunited with his whale via a thundering good stooshie, I would recount the conversation but lack C3PO’s skills. Incredibly the pair carried on drinking, he swilling heavy and Talisker. She, obviously of delicate constitution, just the heavy, both frequently igniting the end products of Winston-Salem. As, theoretically dawn broke the call of the crag was becoming ever stronger, we bade them Ichigo Ichie and left for Coire Mhic Fearchair’s central buttress.

She was from Alabama and, you guessed it, called Rosemary.

6 thoughts on “Rose of Alabamy – A Mountaineer’s Tale”