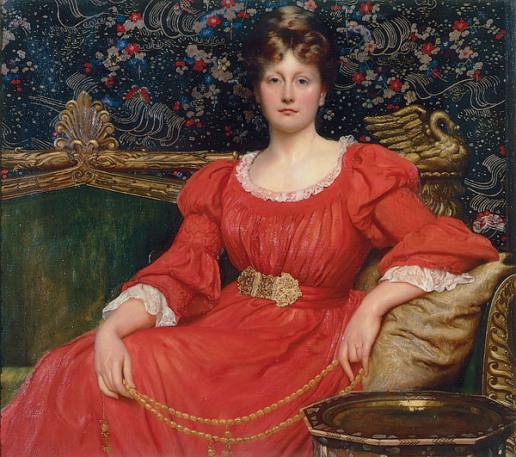 A real treat for art-lovers here, as the inimitable Malty takes us on a tour of three great paintings that make effective use of dark backgrounds. Part two will follow next week…

A darkened backdrop in the right setting can be very effective, witness Gmail’s latest inbox offering, very sexy, looks mean. Used in painting it can enhance and sometimes produce quite startling images as the following three pictures illustrate, although their stories cannot bear comparison, one is workmanlike and a straightforward Victorian wealth flaunter, the second heavily atmospheric and Northern European, the third is complex, fascinating, sublime and important.

Above is Sir William Blake-Richmond’s Mrs Luke Ionides (The V&A, London). Little is known of the sitter, Elfrida the wife of Lucas Ionides, he of the art patronage family and of Greek descent, she occasionally figured in correspondence from John Singer Sargent, taking a rain check with offers of dinner engagements, money could safely be wagered on the fact that Blake-Richmond pinched the idea for including this backdrop from our third painting or certainly one very similar. The show stopper here is obviously the red dress, the colour virtually identical to Gilera red, the effect, combined with the sitters darkened hair against the Japanese silk screen is to make the lady appear to be sitting in front of the painting, not in it. The face, neither plain nor pretty, the expression anyone’s guess, the backdrop and its patterns are as interesting as the figure. 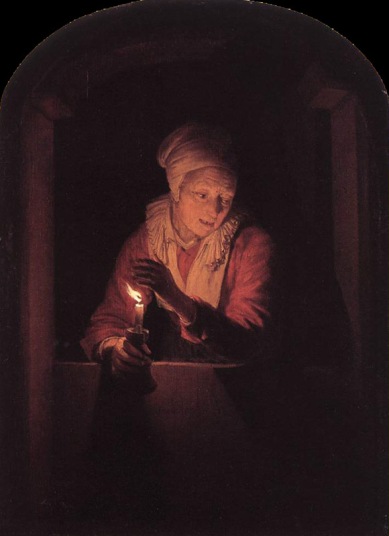 The Leiden artist Gerrit Dou (or Gerard Dous), specialised in creating illusion, and the painting of the old lady with a candle above, Alte Frau mit Kerze (The Wallraf-Richartz, Cologne), is a good example: she appears to be leaning out of the painting and, shrouding the candle, a symbol of life, from the draught. Thought to be a warning, pay attention to how you use your time. The detailing of the candlelit wrinkled face is astonishing, painted in 1661. 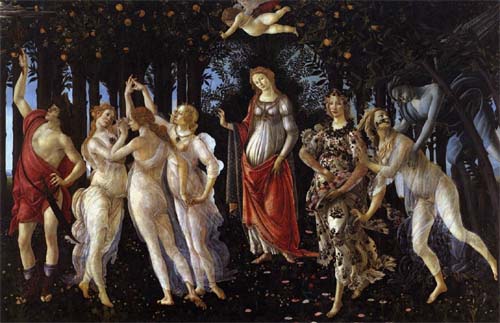 The scene begs musical accompaniment and what better than Jacopo Peri’s L’Euridice the very first known opera (or possibly not, Giulio Caccini’s allegedly having got there first, or possibly Peri’s own Dafne)

The Uffizi’s room 10 seems at times daunting, needing a degree of planning. Akin to watching the sunrise over the Matterhorn, forty miles away, from the Hirondelles ridge on the Grandes Jorasses, Julia Roberts, Sigourney Weaver and oneself, marooned in an Alpine chalet, the Olympics cancelled, the list of superlatives is long. Having climbed the slightly grand and strangely depressing stone staircase, sauntered past the Giottos, Fra Angelicos and a boatload of Lippis in the preceding rooms, best described as the pre-wash, we arrive at the door of room No 10, dive in and the sun comes out.

For me Primavera dominates this room, although not the main centre of attention, that accolade rests on the shoulders of Venus rising. The painting, set in what is assumed to be the garden of Venus, is I think, the star of early renaissance Italian art, that took up the once dropped baton of classic Greek and Roman art, a baton that may have been lost but for the wealth created by the merchant classes trading in the Italian city states. It whispers beguilingly “this is why you exist, we are the renewal of life”. Stand before this scene for long enough and the figures of Chloris, Flora, Venus and the Graces will, while floating out of the orange grove, merge into one sublime, ethereal figure representing consummation and birth.

Painted in tempera on wood and in the days when artists were not considered part of the establishment, they were tradespeople, their studios painting workshops, the Bodega, often open to the street. We can imagine the team of understrappers feverishly mixing pigment with egg yolk whilst the gaffer organised his pupils, “Massimo, it’s your turn to do feet this week” and so on it went, all by commission only “I need a new bed end, by next month if possible. Oh, and it must be six by three and could we have a bit of Ovid in there, the wife insists, incidentally, no more than 200 ducats this time, things are a bit tight” the commission invariably sealed with a legally binding contract, the bodega’s outside squad handling the fresco contracts. Giorgio Vasari’s Vulcan’s Forge is said to be based upon the bodega, with added members of the Amalgamated Union of Sheet Metal Workers, Coppersmiths, Heating and Domestic Engineers. This method of end product specification was arguably preferable to the previous centuries when the customer base consisted of one, the church, where the painting was sometimes used as a sledgehammer cracking a walnut, the Strozzi altarpiece, consisting of Paradise and Hell by Nardo di Cione, in the Santa Maria Novella is a good example of the ‘good cop, bad cop’ school, both are dog’s breakfasts.

The painting’s story, so often told and with as many variations as there are experts, is worth repeating, it is of love and marriage, delicately entwined with renewal, spring. Beginning on the right with Zephyrus, the god of wind, who is holding the nymph Chloris whom he had possessed and then, through a bad dose of conscience, married, giving her the ability to germinate flowers. She is transformed into Flora and, with the assistance of the spring wind, is broadcasting flowers hither and yon from her mouth and her dress. As with many early renaissance Florentine women, Flora is golden maned and Nordic looking, her face both melancholic and thoughtful, as many of Botticelli’s women are. She is both enchanting and gorgeous, pardon me as I drool.

Venus, unusually, has her kit on and resembles Botticelli’s Madonna, her arm is raised in what appears to be a benediction. The painting was probably a wedding present from Lorenzo di Pierfrancesco di’ Medici for the marriage of Lorenzo di’ Medici and Semiramide d’Appiano and hung outside of their nuptial chamber, Venus in fact may have represented the ideal woman that Semiramide should be. Giorgio Vasari (a sort of sixteenth century Brian Sewell, although Giorgio could paint) mentions seeing the painting hanging, along with Venus Rising, in the di’ Medici’s Castello villa, in the mid sixteenth century. The Three Graces, as ever, representing the sum total of Venus’s attributes and are doing their usual twirling virgins routine, their long flowing hair a symbol of Florentine chastity. Venus’s sprog, that irritating little scroat Cupid, the Romans thought that he was her son, is loosing off his arrows like a demented Jockey Wilson, Venus is wary, having dreamt about that incident , when one of his arrows nicked her ear, leading to the session with Veronese, lying there for many hours with Adonis’s head resting in her lap, before she poked him in the ribs, suggesting that he sod off out and do a spot of hunting, what a bummer. Far left is a decidedly Millibandish Mercury, holding back the storm clouds whilst the action takes place, although the hand on hip suggests otherwise, sweetie. It has been suggested that the pose is based upon Donatello’s David.

We do accumulate stuff, some good, some not so good and a lot that is best forgotten. Now and again stuff is so perfect the mere thought of it lights up the soul, Primavera is that good stuff, the very best. Sandro, you mah main man.

Next time: Malty digs even deeper into those dark backgrounds…