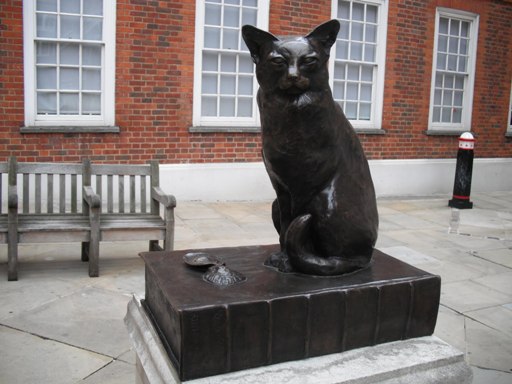 Somehow, I had always visualised Dr Johnson’s favourite cat, Hodge, as a big lump of contented tabby. So I was surprised to learn that this famous cat was black. The cat-averse Boswell doesn’t bother to describe Hodge, and clearly finds his hero’s fondness for a cat rather infra dig…

I never shall forget the indulgence with which he treated Hodge, his cat: for whom he himself used to go out and buy oysters, lest the servants having that trouble should take a dislike to the poor creature. I am, unluckily, one of those who have an antipathy to a cat, so that I am uneasy when in the room with one; and I own, I frequently suffered a good deal from the presence of this same Hodge. I recollect him one day scrambling up Dr. Johnson’s breast, apparently with much satisfaction, while my friend smiling and half-whistling, rubbed down his back, and pulled him by the tail; and when I observed he was a fine cat, saying, ‘Why yes, Sir, but I have had cats whom I liked better than this;’ and then as if perceiving Hodge to be out of countenance, adding, ‘but he is a very fine cat, a very fine cat indeed.

No mention of colour there, but Hodge, having become famous in his lifetime, was mentioned in various memoirs of Johnson and even celebrated in verse. When Hodge died, Johnson’s neighbour Percival Stockdale wrote An Elegy On The Death Of Dr Johnson’s Favourite Cat –

Who, by his master when caressed,
Warmly his gratitude expressed,
And never failed his thanks to purr,
Whene’er he stroked his sable fur…

‘Sable fur’ – so there you have it: Hodge was a black cat.

Hodge has had the rare good fortune of being twice immortalised in literature (not including Stockdale’s effort) – once in Boswell’s great Life, and once in the epigraph to Nabokov’s Pale Fire:

This reminds me of the ludicrous account which he gave Mr. Langton, of the despicable state of a young Gentleman of good family. ‘Sir, when I heard of him last, he was running about town shooting cats.’ And then in a sort of kindly reverie, he bethought himself of his own favourite cat, and said, ‘But Hodge shan’t be shot; no, no, Hodge shall not be shot.