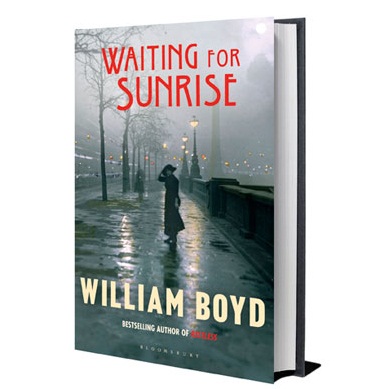 Dabbler Book Club member Monix reviews William Boyd’s latest blockbuster. We also have a couple of copies to give away – see below…

Lysander Rief, a quite handsome, quite well-educated, quite successful young actor, engaged to be married to one of England’s most glamorous actresses, has cancelled all his plans, withdrawn his savings and arrived in Vienna to consult an eminent psychiatrist. As he hurries to keep his first appointment with Dr Bensimon on a fine summer’s morning in 1913, there is nothing in his appearance to suggest heroism; the narrator dismisses him as a rather dandyish Englishman.

In Dr Bensimon’s waiting room, Lysander meets two people who will quickly change the course of his life. Hettie Bull bursts into the room in a state of great agitation, demanding to see the doctor although she has no appointment; as she pushes her way into the consulting room, a “military type” steps out and introduces himself to Lysander as Alwyn Munro.

What follows is a ripping yarn of intrigue, deception, passion, treason and espionage. His neurosis cured, Lysander embarks on a clandestine affair with Hettie Bull, who proves to be very dangerous to know. He spends some time in a Viennese police station before being bailed out by Alwyn Munro; he escapes to England in time for the outbreak of war, enlists in the army and is pressured by Munro into working for the wartime intelligence service. A very brief appearance on the battle front provides Lysander with the cover story that he needs to begin his investigation into leaked intelligence.

The spy story owes more to John Buchan than to le Carré. Lysander encounters his suspected traitor on Hampstead Heath with just the same air of innocent heroism as that displayed by Richard Hannay on the grouse moors of Scotland. Anyone who has fond memories of the Boy’s Own Paper will find this a gripping and enjoyable read. But don’t be deceived by the seeming simplicity of the plot, nothing is as it seems, no-one is what they appear to be and the denouement leaves the reader with more questions than answers.

Waiting for Sunrise is my first encounter with the work of William Boyd. Had I known that he was such an exponent of the almost-lost art of descriptive writing, I would have acquired all of his books as they hit the shelves. He is able, seemingly effortlessly, to take the reader directly into a scene whether it is ‘standing in a skewed pentangle of lemony sunshine at the sharp corner of Augustiner Strasse and Augustinerbastei’ or ‘standing shivering in the angle of two walls in Archer Street’ in London, where ‘the fog, pearly and smoky, seems to curl and hang – as if from a , million snuffed candles – around the city block like something almost growing and sinuously weedy, blanketing and vast, seeking out doorways and stairways, alleyways and side streets, the levels of the roofs quite invisible.’

My favourite line in this beautifully written book appears on page eight. Lysander is looking out of the window of Dr Bensimon’s waiting room onto the courtyard below, ‘as he watched, an old, aproned woman appeared, effortfully limp-lugging a brimming coal scuttle.’ This image will stay with me forever and I can imagine English teachers everywhere using paragraphs from Waiting for Sunrise to demonstrate the art of good writing.

We have two hardback copies (worth £18.99 each) of Waiting for Sunrise to give away to members of the Dabbler Book Club. Join here free if you haven’t already done so. Two winners will be picked at random on Monday 12 March. Normal T&Cs apply.

3 thoughts on “Review: Waiting for Sunrise by William Boyd – and win a copy”