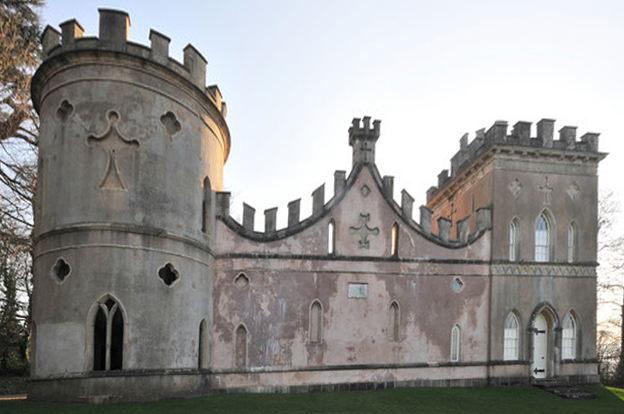 Gwyn visits ‘the Taj Mahal of Wales’ and recalls a remarkable impromptu lunch cooked by none other than the late, great Fanny Cradock…

We slouched into a pub last week, the Clytha Arms on the old Abergavenny to Raglan road. There were more dogs than people in the stone-flagged bar, and I thought — this is my kind of pub. I still wasn’t allowed to smoke though. The beer and the food compensated. I had a couple of pints of Pigor Mortis, ABV 6%, to go with my laverbread, cockles and bacon, while the driving spouse had half a dozen large (and delicious) oysters for £6.

I had had a memorable culinary experience the last time I was in the area, I recalled. On the road to Abergavenny stands Clytha Castle. Clytha is not a castle at all, it is a memorial, but the memory here is so touching, so pathetic, so genuine, and the building itself so ghostly and remote that it goes straight for the emotional jugular. It is impossible to stand in front of Clytha and read the inscription without feeling that this, in spirit, is the Taj Mahal of Wales:

This Building was erected in the year 1790 by
WILLIAM JONES of Clytha Houfe Efq
Fourth Son of JOHN JONES
of Lanarth Court Monmouthfhire Efq and
Hufband of ELIZABETH the laft furviving Child
of Sir WILLIAM MORGAN of Tredegar KB
and GrandDaughter of the moft Noble WILLIAM
Second Duke of Devonfhire
It was undertaken for the purpose of relieving a mind
fincerely afflicted by the lofs of a moft excellent Wife
whofe Remains were depofited
in Lanarth Church Yard A.D: 1787
and to the Memory of whofe virtues
this Tablet is dedicated.

William Jones, like Shah Jahan, needs no more eloquent testimony of his loss and grief. As a lesser soul might find solace in spirits, so Jones found solace in stone. The building he left us is pure magic; derivative yet wildly original, it is a late fling of Strawberry Hill Gothick, to a pattern which is its own master. Built in an L-shape, it consists of three towers joined by two curtain walls. The first tower is oval and hollow; joined by the north facing curtain wall to the square centre block tower. This in turn is joined to the south, round tower, two storeyed, but with only the ground floor habitable. The most remarkable feature of the building is the aptly named north curtain wall, which sweeps like a battlemented theatre curtain up to a coronated pinnacle; there is nothing else like it in folly architecture—or, for that matter, in the real world.

Clytha has been ascribed to John Nash, and there certainly is record of a payment from Jones to Nash for Clytha Castle, perhaps for some additional work or for checking the details of the design, but it would seem that William Jones was his own architect, assisted by the Shropshire landscape architect John Davenport who had earlier designed a gothick orangery for Warren Hastings at Daylesford House. J. C. Loudon dismissed Clytha as ‘gaudy and affectedly uncommon’, but time has weathered its initial assault on the landscape, and now the Landmark Trust has bought the castle, refurbished it and lets it out for villa holidays with a difference—not everyone can boast of spending a holiday in a memorial.

And not everyone can boast of lunch in a folly cooked by a celebrity chef. Years ago I made my honest crust in the book publicity business, and I used to accompany my celebrity authors around the country to media interviews. As I was in charge of the schedule, it was carefully engineered to include visits to follies wherever possible between TV stations. This was acceptable on every count. The authors found it an amusing and welcome diversion, a degree of exercise and fresh air was involved, and I added to my catalogue of follies. So it was that one lunchtime we advanced on Clytha Castle, my celebrity author and me, while I discoursed on the history and romance of the building.

Being lunchtime, two male Landmark Trustafarians were in the kitchen preparing lunch for their women as we surreptitiously passed by. My author peeked through the open window and could not restrain herself. “No, no, you’re doing that ALL wrong!” she bellowed as she strode through the door.

Thus it was that four bemused holidaymakers found their lunch cooked for them by the fearsome Fanny Cradock, Britain’s first celebrity chef. In the days when there was only one TV channel (and therefore only one TV cookery programme — what bliss! — can you imagine it?) she was the only celebrity chef. She was Delia, Nigella, Heston and Jamie rolled into one, and off-air she made Gordon Ramsay sound like a whey-faced postulant. The Landmark Trustees were too frightened to protest.

I’ve often wondered how they recalled that day.