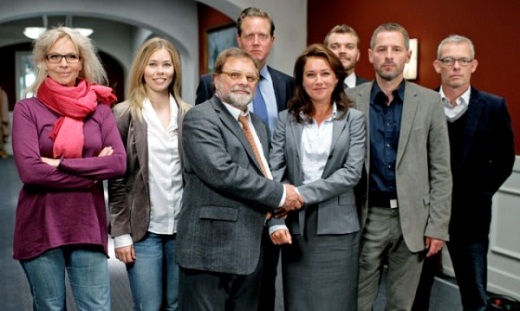 Brit enjoys the opening episodes of the latest Danish drama import Borgen, but worries that it might have already jumped the shark…

Borgen, being on BBC Four (Saturday 9pm), Danish, and set in the world of media and politics, has inevitably got the Twitterati excited but the challenge for the reviewer is to see through the layer of respect automatically granted to foreign-language dramas. I enjoyed the much-hyped The Killing but it was ultimately quite silly and not in the league of the best US dramas.

Subtitles often give an undeserved impression of authenticity and gravitas (Passion of the Christ, most Frog films) as well as exoticism, though this is admittedly mitigated in Borgen first because Danish actors are normal-looking or even ugly (save for a sensational Claudia Schiff-alike newsreader, whose lover’s ticker understandably packs up as he’s impregnating her) and second because the herdy-gerdy language is inherently funny, especially with all the English loanwords. “Fifteenminutesoffame” was a good one, and giving Europe the apparently-untranslatable “shpin-doctor” is yet another legacy of which New Labour can be proud.

Borgen’s classy title sequence evokes Mad Men but the action is just like the political bits of The Killing, only more so, and as in The Killing we have a vulnerable but indefatigable female lead with work-life balance issues. Birgitte Nyborg is the leader of the Moderate Party. Her quest in the opening episodes is to form a government after Denmark’s system of proportional representation delivers a dogs’ breakfast of an election result and a bewildering quantity of niche parties stab one other in the back, suck up to their enemies and ride roughshod over their election pledges for a sniff of tepid Danish power (it’s a great advert for First-Past-the-Post, this). In this quest Nyborg is assisted by Jim from The Royle Family, who has left the comfort of his armchair to stalk Copenhagen’s City Hall offering realpolitik suggestions for the best backstabbing, sucking-up and roughshod-riding moves.

All this People’s Front of Judea/Judean People’s Front stuff is tremendously entertaining, even though, or perhaps because, the stakes are so low in Scandinavian politics: the Prime Minister’s finger hovers not over the nuclear button but over a button which might approve a relatively inexpensive new motorway extension. It’s amazing how gripping the difficulties in ratifying a Danish Budget Bill can be.

Borgen was shaping up to be deliciously amoral so it’s a pity they didn’t go the full Francis Urquhart: Nyborg’s USP, alas, is that she is somewhat less unprincipled than everyone else. In episode one she sacks a shpin-doctor for excess skulduggery and gains popularity by wandering off-script to deliver an impassioned, idealistic speech on live TV. I was amused by the idea of an impassioned idealistic political speech coming from somebody whose party’s raison d’etre is to be Moderate, but that’s by the bye. In fact, the Moderates seem to be somewhere between our Lib Dems (before they got mugged by power) and our Greens which, this being television, naturally makes them the goodies. The baddies are represented by the right-wing parties who are all, equally naturally, racist.

We cranky mal-pensants are used to all this from the telly, of course, and we learn to live with it but more worrying was the fourth episode, which took leftism to unusual levels. It seems that Denmark has a guilt complex over Greenland, preferring to brush the colony’s social problems under the carpet. Nyborg is all set to follow suit until, after visiting and submitting to a heartwarming montage of local characters, she determines to do something about it. And guess what, it turns out that Greenland’s difficulties with alcoholism, sexual abuse and suicide are actually, when you drill down, all the fault of George W Bush and the War on Terror! It was as trite and limp as Prime Minister Hugh Grant jolly well standing up to the President in Love Actually.

The Greenland episode looked uncomfortably like a shark-jump to me, as if the pattern from here on will be that in each self-contained House-style show Nyborg will face a political problem that she’ll eventually solve by sticking to her soft left moral principles. I hope I’m wrong as it looked like it was going to be much more fun than that.