Near where I live there is a ghost sign advertising Centaur Cycles –‘the best the world produces’. 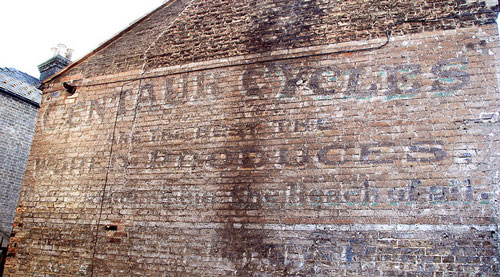 Centaur cycles were produced in Coventry roughly between 1875 and 1925. The company were known for their successful lightweight bicycles (the King of Scorchers, for instance, available from 1890, weighed only 26lb), but they also produced cars after 1900, and some monstrous hybrid single-geared motorcycles.
Centaur is of course a frighteningly apt name for a bicycle company, and I am amazed that Humber let it fall into disuse. Perhaps they found it unsettling, a reminder of a remote almost mythical past when men built flying machines and phonographs, and invented wireless telegraphy and the incandescent electric light bulb; a past when the sight of a man or woman on a bicycle flashing past must have been magical, strange, Centaurean.
The centaur, to the ancient Greeks and to a lesser extent to the Romans (by whom they had become domesticated to Bacchus) and the Renaissance, was a byword for wildness and incivility, for concupiscence and drunkenness. They dwelt in the wooded mountains of Thessaly, out on the margins of the civilised world, and ate raw flesh.
The precise nature of their anatomy took some time to settle down. Archaic representations of centaurs have a wholly human form which is propelled by equine back parts, and some with hooved but otherwise human forelegs. The monster is by definition a creature of mutable form. 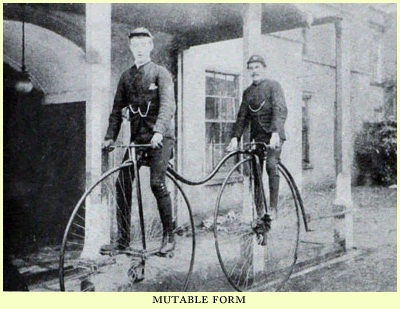 Dante places the Centaurs in his seventh circle of hell, where they roam the banks of the boiling Phlegethon, preventing the violent, who are immersed there to varying degrees, from climbing out. Virgil identifies Chiron, their leader, to Dante, calling him ‘the one who contemplates his breast’, – at once a contemplative pose and an inquisitive one, as though Chiron, the wise centaur who educated Achilles and Jason, were habitually searching out the point of contact, the shifting boundary, between his human and animal parts, his divine and bestial nature.
The blending of this point or line became in the Renaissance a byword for artistic skill. In the 5th century BC Lucian described a painting by his contemporary, the great Zeuxis, wherein a centauress is giving suck to two infant centaurs, one on her human breast and other on her animal teats. Lucian particularly praises the imperceptible transition between human and animal.
Ovid also, in his description of the battle of the Centaurs and Lapiths in Book XII of the Metamorphoses, describes the almost human beauty of Cyllarus, who is about to die in the arms of his beloved Hylomene, a scene depicted at the centre of Piero di Cosimo’s Lapiths and Centaurs. 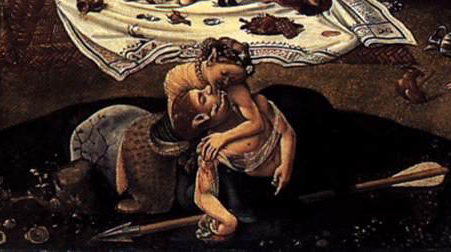 These creatures are, in spite of the riot at their backs, tamed, subdued, almost civilised creatures. At first glance you might not even recognise them as centaurs. If the warring humours of a centaur are typically separated out in a demonstrable chromatography of the soul, then this blending, this smoothing or blurring of the line so that it almost vanishes, is a tacit admission that we are all more nearly centaurs than we perhaps wish to acknowledge.
I do not wish to suggest that Mr Polly on his King of Scorchers appeared to his contemporaries as a Conquistador to the Aztecs, a composite machine-man, ferocious, unknowable. From the forest. That would be fanciful.
But the soul of a cyclist, I like to think, is forged in a teenage breast; a cyclist is a perpetual misfit, an anarchist, a thrill-seeker, hated by pedestrians and car-drivers alike, a creature of the margins, an unsettled, semi-chained, half wild creature; a fragile precarious imp balancing at speed like a mountain goat insouciantly skirting a precipice.  The bicycle, in other words, in its ghostly origins at least, is a machine of the failed life – exultant, free, absurd.

5 thoughts on “Centaurs of Norbiton”