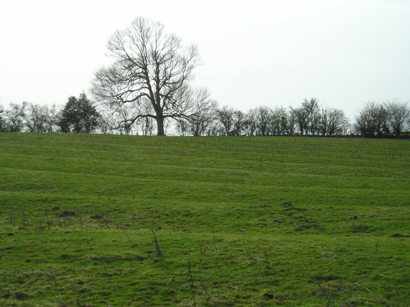 Tell someone you’re going walking in Leicestershire and chances are you’ll be greeted by a blank bewildered look, or the bald question ‘Why?’

In fact, Leicestershire has some of the best walking country in England – wide open views, rolling hills, hedgerowed pastures grazed by sheep and cattle, patches of woodland (mostly coverts for foxes – this is Quorn country), little stone-built villages of understated charm with sturdy spired churches, and otherwise, as far as the blue hilly horizon, little or no evidence of human habitation. Beautiful walking country, and – what gives walking in these parts of Leicestershire its special feeling – country with its history still written on the face of the land.

Everywhere is evidence of the medieval past, in the form of the distinctive ridge and furrow pattern (as in the picture above) left by generations of ploughing, and – most dramatically – the outlines and ‘humps and tumps’ of deserted medieval villages.

In the most remarkable DMVs (as historians call them), such as Ingarsby, the hollow ways that were the village’s streets can still be walked, between raised areas where the houses were – even the site of a mill can still be made out, and nearby a motte and bailey castle and the moat of the old manor, the one house of the medieval village that is still standing. Villages were deserted for various reasons – epidemic disease reducing population below viable levels, marginal sites proving unsustainable, loss of crops causing famine – life was hard, and people more mobile than we commonly think – but Ingarsby is a classic case of 15th-century enclosure driving the population off the land.

Those sheep pastures, so peaceful and picturesque today, represented the end of village life for the inhabitants of Ingarsby and many another village, at a time when, in Thomas More’s phrase, sheep ate men. While the sheep barons grew fat in their big houses (and indeed abbeys – it was Leicester Abbey that enclosed this land), those who had once lived off the land around were evicted and thrown on their own meagre resources, many becoming beggars, many dying of disease and want.

To walk amid the remnants of their village life – which survive only because the heavy land has remained as unploughed pasture – is a poignant reminder of a historical experience that resonated for centuries, continuing in different forms (read John Clare!) and still feeds into the unique English relationship with the countryside, into that faint unease behind our enjoyment of it, a sense of brutal disruption, shameful appropriation, of something lost beyond recall.

4 thoughts on “Walking in Leicestershire”