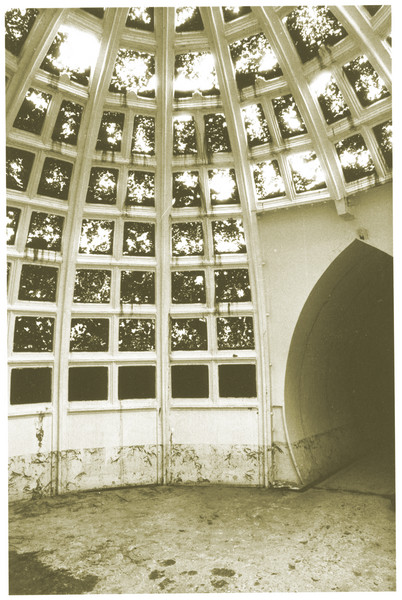 Gwyn Headley, the foremost authority on English follies and co-author of the magnificent new ebook series Follies of England, takes us into a strange subterranean world…

On the other side of the dirt road is a scrubby wood, derelict, ramshackle and overgrown. In the wood is a strangely formless holly tree. You duck under the branches; it has a hollow centre. In the middle of the encircling holly tree, like something out of a Rupert Bear story, is a door. There is nothing else above ground, just the tree and a door. You go through the door and find yourself walking down a ramp, a spiral going down into the earth.

There is very little light. What little there is illuminates, on your right, an empty, circular room lit from above by glass pavement lights let into the floor of the wood. Windows roughly cut into the wall allow you to look into the room as you walk down the ramp. Eventually there is a door from the ramp into the room. The room is cold and damp, faintly repellent. The ramp continues down. It gets darker. The sloping floor gives way to steps. The steps carry on down. There is now no light at all. You have a torch. You need a torch. You can pick out the shape of another room beneath the round one. You are now about 40 feet down inside the earth. It is musty. Make your way through another doorway and suddenly the torch is shining into emptiness; you are in a room so large that the beam will not touch the other side.

Walk carefully across the rough floor. Don’t look in the niches; nothing pleasant lives in them. Walk over to the other end of the chamber, where you can see a pinprick of light. There are more steps, steps down to a boat — yes, a boat, moored in this flooded tunnel 50 feet below ground level. Embark. Cast off. Walk the boat down the tunnel to the point of light a mile? a hundred yards? away. It gets brighter.

You come out on to a lake, a warm, comfortable, capable sort of a lake. In the middle of the water is an oblong island, small with a low wall surrounding it. There is a statue in the water just offshore. Row across to the island. It lies about 50 yards from the lakeside and is big enough to take a dance band, if only there were somewhere to dance.

There is somewhere to dance. There is an underwater ballroom domed, and built of iron and glass so you can watch the fish dance around you as you dance. Climb down the stairs to a room directly below the floor of the island; light and airy, nothing to worry about. Down some more steps, through a short tunnel, and you’re in the glass ballroom. It isn’t very big, but it’s big enough and it is completely underwater. You can dance underwater by yourself not even the Joneses could keep up with this. A lances arched submarine tunnel leads 100 feet back to dry land and reality.

All this is true. This fantastical place exists — not in crazy California or in sensual Samarkand but in stolid, suburban Surrey. It was built at the turn of the twentieth century by Whitaker Wright, a financier and self -made millionaire who spent one and a quarter million pounds — who can guess what that would be worth today? — to improve his estate south west of Godalming. He built four lakes, moved a couple of inconvenient hills, planted a forest or two, imported treasures from all over the world including the head of a dolphin in bronze so big that when they were hauling it up to the estate from Southampton it got stuck under a bridge and they had to lower the road, and then erected a very ordinary, undistinguished house, now demolished, to overlook the lake with the underwater ballroom.

Wright’s demise was as sensational as his follies. Sentenced to seven years’ imprisonment for fraud, he committed suicide by swallowing cyanide before he could be taken from the Old Bailey, and his folly park is now a private estate.

Witley Park features in Follies of Surrey, one of the county-by-county e-books that form Gwyn’s epic Follies of England series, available to buy for just £2.99 from www.heritage.co.uk.