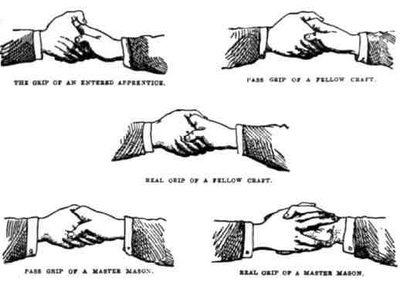 Nige endures the company of a conspiracy theorist…

Not long ago, for reasons that would be tedious to explain here, I found myself sharing an uncomfortable sofa with a sturdily built one-eyed man of County Galway origin. Having filled me in on the topography of that county of lakes and mountains, he deftly steered the conversation to matters theological. A keen daily reader of ‘scripture’, he had an especial interest in (you’re there before me, aren’t you) the Revelation of St John. We are, he assured me with heart-sinking inevitability, living in the end times, and the Devil, that cunning two-faced beast, is stalking the land.

At this point, he fixed me with his one good eye and unleashed his zinger – the Freemasons. They (I shall not stoop to ‘dey’ but take it as read) are everywhere – and by everywhere, he certainly meant everywhere; his conviction in this matter was nothing if not thoroughgoing. The Pope, the whole of the Vatican, the bishops of all churches and many of the clergy are Freemasons, doing the devil’s work, and so are all the world’s leaders. As a result, all they have to do is pick up the phone to each other, ask for a few nuclear weapons or a little war or invasion, and the deal’s done – anything to oblige a fellow Mason.

He knew all this because, by way of supplementing his scriptural researches, he had read many books on the subject and watched many DVDs. As for the police – the well informed Galwayman had much to impart on that subject, not least about the Soham murderer (a Mason of course)… But alas at this point a twinge in my back forced me to rise from the uncomfortable sofa and leave him to await his next pupil.

I wonder if all this explains where Gordon Brown went wrong – he wasn’t a Mason. Blair, so the Galwayman informed me, was. Which explains everything. Which is, of course, the beauty of conspiracy theories.

And now I must get my application to join the Masons in the post. It might be fun to run the world for a bit.

11 thoughts on “A Full and Complete Explanation of Everything”