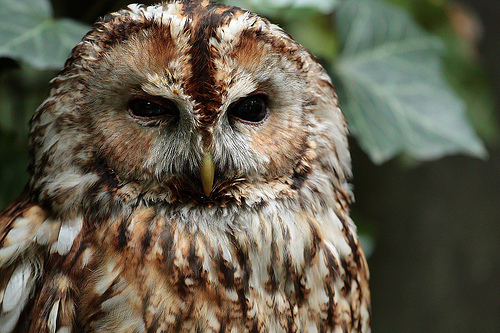 Brit the Elder has supplied a fiendish riddle for your puzzlement. Can you crack its secret and find the question to which Alby the owl provides the answer?

To prevent anyone (ie. Adelephant or JL) from giving it away, there’ll be no comments for this one, so email your answer to editorial@thedabbler.co.uk  by next Thursday. One correct entrant drawn at random will win glory and a book (they’ll be able to choose from a few good ones we have lying around here in the Dabbler garret).

There’ll be a clue next week on The Dabbler. Here goes…

The owls at Blackstone Zoo, on the edge of Exmoor, were famous throughout the world. Indeed, people would come to Blackstone from the furthest corners of the globe to see these amazing birds. One owl in particular had caught the attention of the media. He was a long-eared owl called Albuquerque, and he had featured on the covers of both Time and the National Geographic, where he was hailed as “The wisest bird on the Planet!”

To ensure that Albuquerque’s intelligence was always up to scratch, his keepers, Sid and Wally, would give him a little test each day, before the visitors arrived. Thus, early one morning, the two keepers approached the owl cages, whispering conspiratorially. The cages were numbered, and Albuquerque’s cage was number five, hence he was often referred to by the zoo staff as Fiver, The Fifth, or often just Alby.

“Good morning, Alby,” Wally said cheerfully. “Got a great problem for you! You won’t believe how clever the words are. Bet we end your winning streak today!”

“Tell us Fiver,” Sid enquired, “which is more, a half or half of two halves?”

There was no response from the bird. Wally turned to Sid. “The fifth owl looks a little peaky today, don’t you think?” he asked.

“Hmm, he certainly does,” replied Sid. “You haven’t given him anything unusual to eat, have you?”

“No, not I! But maybe one of the punters has. Why, even his pointy ears look somewhat floppy!”

Sid agreed. “He just doesn’t have the same healthy glow as the others today.”

This exchange had thus far left Albuquerque unmoved. He sat upon his perch with his eyes closed, as if completely indifferent to the banter of the keepers.

“You know,” Wally continued gamely, “I reckon the problem, whatever it is, began nearly two months ago.”

“Perhaps it’s the cage. Maybe we shouldn’t keep Albuquerque enclosed so much.”

Wally nodded. “Perhaps he could go for a flight more often.”

Sid’s brow furrowed, as if he was thinking back to some incident in the past. “Or…maybe he’s just got those swollen glands again.”

The two keepers fell silent, but now they both stared intently at Alby. After a brief but tense pause, the owl slowly opened one eye and fixed it upon the anxious pair. Then, in a dark, strident voice, reminiscent of the great Richard Burton, he growled, “Twelve!”

Both keepers gasped in amazement.

With that they turned away, chuckling at the owl’s acumen, and vowing to catch him out next day. Alby closed his eye, but he allowed a little owly smile to touch the corners of his beak.

For twelve was indeed the right answer.

But what was the question?