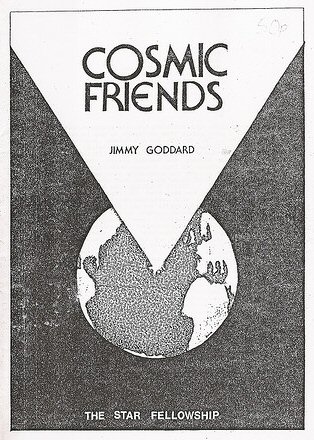 My communications with extraterrestrials probably began before I realised it, for I have always been attracted to and interested in the idea of space travel.

These are the opening words of Cosmic Friends, an undated twelve-page pamphlet by Jimmy Goddard. I was sent a copy in the latter part of the last century by a correspondent, who described it to me as “a work of comic genius”. As indeed it is, being a masterpiece of that particularly poignant kind where the comedy is unintended. “Mr Pooter Talks To The Space People” could be an apposite subtitle.

At Sunbury Grammar School in 1960 “(at the age of fourteen)”, young Jimmy meets fellow pupil Philip Heselton, who introduces him to the STAR Fellowship, “an organisation devoted to communication with extraterrestrials”, and to its founder, Tony Wedd of Chiddingstone, Kent. In 1961 there are two separate incidents in which Jimmy sees “a tiny object, black against the bright sky moving fast across my line of sight”. It is almost certainly a UFO.

But at this stage, Jimmy is more interested in thought communication.

It must have been in 1962 that, in looking into a mirror, I noticed the scar which I have had on my forehead since an injury at the age of five and suddenly realised it could extend into my brain and be causing the problems that have dogged me throughout my life. I feel this must have been a communication. Much later I was to realise myself to be virtually living on half a brain. Due to non-cooperation of the medical profession I eventually (with advice and encouragement from my communicators) made a rudimentary brain scanner which seemed to confirm this.

We are not given any details of the rudimentary brain scanner, alas, but there is another piece of equipment, equally if not more basic:

there was an interesting communication at, of all places, Salisbury railway station in 1966. I was advised by communications to build a copper cone to help my condition. Having read of the apparent Atlantean cones in “Other Tongues, Other Flesh” by George Hunt Williamson, with their complicated circuits, I felt unqualified to build one. The answer rapped back: “Just build a simple cone of copper – that’s not beyond you is it?” I sat up with a start – surely space people would not talk like that? But it jerked me out of my self-pity and I began a regular daily use of a cone which my father made from a piece of scrap sheet copper.

Jimmy does not say if he is wearing the cone on his head when, again in 1966, there is a dramatic development:

In this year my parents and I had a package holiday in Holland, staying in a hotel in Utrecht. We had guided tours of all the usual things – cheese farms, diamond markets, clog-makers, tulip fields etc. – but most interesting were two people who were in the hotel and travelled with our group. It was a young woman and a somewhat older-looking man. They did not communicate with us much, but on at least one occasion the woman sat next to my mother on the coach. They chatted, but she would not be drawn into revealing much of her own life and did not seem to know much about English towns mentioned. She had an accent my parents could not place, and my father noticed when going through passport control at the end of the holiday that they did not have British passports, but somewhat smaller ones. But it was something that my father mentioned after the holiday that made me sit up with a start. The man (who never approached us) had most unusual eyes, with what appeared to be vertical pupils… I remembered the Scoriton story I had heard in the lecture the year before, in which “Yamski’s” Escorts also had this feature. Were they space people, and what was their purpose? The contact with my mother seems to indicate that they wanted to make themselves known to me, but not actually to contact me.

The following year, Jimmy does make an important contact, though not with a space person:

At the end of 1967 I met my penfriend Doris, who I had been writing to for three years. We fell in love, and were engaged on November 1st. Eight days later, from a bus in her home town of Blackburn, Doris saw a silvery UFO.

As we shall see, Doris is to make further sightings, but is not always sure of their extraterrestrial origin. Now we suddenly skip forward twenty years. It is 1986, and Jimmy, having restarted the STAR Fellowship (“though getting interest aroused was difficult”), is videotaping a report of the Giotto space probe as it passes through Halley’s comet.

just as Giotto approached the closest point to the nucleus, the picture began to falter… this last, blurred picture seemed to show a pattern of white dots. I freeze-framed the picture and sketched it on a piece of paper. It seemed to be just a random pattern… then I had an impulse to turn the paper upside down. Immediately there was a rough outline of the letters “YH” – the phonetic initials of “Yava Hoosita”, the space greeting received by Tony Wedd. It was nothing proveable… but it did seem like a final seal of approval for my ideas on thought communication and my faith in it over the years.

This might have been a high point on which to end his potted autobiography, but Jimmy has a final anecdote, one which displays his peculiar genius. I find it almost unbearably poignant.

The final occurrence was a sighting which happened over Christmas, 1986, during a visit to Doris’s relations in Blackpool. Standing outside the flat where we were staying, after dark, Doris noticed two starlike objects wheeling and turning about in a very birdlike motion as if birds were reflecting the light. However, seagulls are not nocturnal and bats are not white (and the motion was more like birds than bats); also the light from them did not seem to vary. Also, nothing like them was seen subsequently. The sighting lasted several minutes, and we left the scene before the objects vanished – Doris assumed they were birds. We were looking in the direction of the sea (not visible from this street) at an oblique angle.

Frank Key will be giving a rare public performance in London next month. Book your tickets for An Evening Of Lopsided Prose And Lugubrious Music on Friday 18 November here.

Members of the League of Dabblers (join here) go free – to request your ticket email editorial@thedabbler.co.uk and join in the fun!