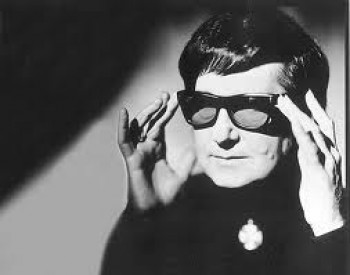 Had he lived, Roy Orbison would have been 75 this year. Here, Daniel Kalder writes about the Big O’s transcendental power…

For me, like most people, memory is intricately intertwined with music. Another Brick in the Wall pt 2 was a hit the year I started school, and so the song always resurrects those early experiences of classroom tedium. Falco’s Rock Me Amadeus, playing on the ferry that brought me from England to Holland in 1986, summons textures of my first trip abroad from the sinkhole of amnesia; while Kraftwerk’s Radioactivity is forever fused with a 6am walk I took around Amsterdam ‘s Schipol airport. Endlessly and subjectively I can listen to a track and landscapes, people, places and moods return.

What is the mechanism behind this? I don’t care. I note only that the links in the chain of music and memory are almost always forged accidentally- standing in a shop, watching TV, sitting in a café. When I was travelling in Central Asia a few years ago however I decided to conduct an experiment- I would intentionally fuse some music with the landscape to use as an aid to memory later.

That was the plan at least. Unfortunately as I came up with this idea the day before leaving, I had no time to reorganize my MP3 player and so the music I brought with me was just stuff I had picked up recently- Television, Bonnie Prince Billy, Arcade Fire and a few others. Immediately after I arrived I was too overloaded on sensations to listen to any of it. And besides, I hate earphones. Playing the tracks back now, they evoke nothing. However, the Black Eyed Peas’ criminally awful My Humps- which was playing everywhere in Turkmenistan- immediately transports me back to that shitty nightclub in Turkmenabat where a fat girl with a moustache kept bumping into me on the dance floor. Then there’s the acoustic version of Hotel California, which summons unpleasant memories of the gruesome meat market in Balkanabat, from which I fled into a night that stank of burning petrol and despair. But those two fusions were all accidental- like Rock Me Amadeus on the ferry. Maybe that’s just the way it works and the experiment was doomed from the start.

But there was an exception, a moment when my plan transformed a song and the contents of my skull forever, giving me one of the most amazing musical experiences of my life. This is how it happened: I was standing on the edge of a vast pit of fire in the depths of the Kara Kum desert.  In that abandoned nocturnal wasteland, the burning hole seemed almost mythical, even though it was just a crater accidentally created by Soviet engineers digging for gas, and then set on fire by a nomad worried the methane odor was poisoning his sheep. At that moment however, it was as awe-inspiring as the Mouth of Hell itself. After gazing into it transfixed for about fifteen minutes, I realized no photograph could do the hole justice, and the memory would rapidly fade. Suddenly I remembered my plan, to fuse a song with a landscape. I searched through the MP3 player and found some Rammstein- infernal yes, but rather redundant when confronted with an actual pit of fire. Next came Roy Orbison’s In Dreams. Immediately I stopped- this song was already rich with meaning, memory and images for me. Nevertheless, mysterious and perfect as it is, I knew it could absorb more. Better yet I thought the bizarre contrast between eerie 60s pop and satanic inferno would give me an authentic, almost classical surrealist experience, like something straight out of Andre Breton’s manifesto.

But as soon as the Big O started singing in his lower, ghostly register the experience went way beyond surreal. There was no bizarre collision, but rather the music actually fused with the moment, with the desert, the night sky, the dancing flames and the epic emptiness. In fact, as the song continued I realized that that strange, miniature symphony of obsession and dark longing had never sounded so haunting, so piercing, so perfect. I played, and replayed, lost in the song, the heat, fire and darkness. Clearly I had just discovered the perfect conditions for listening to Roy Orbison: on the edge of a pit of fire, in a void. My friend Joe appeared at the edge of the hole. I called him over – I wanted to be sure that I wasn’t suffering from an aural hallucination brought on by the psychic deprivation of the desert. Joe stood there, entranced by the fire and the music, playing and replaying the track. When he finally gave me back the earphones he was wide-eyed:

‘That was almost a shamanistic experience,’ he said.

I understood what he meant. Songs for Orbison were incantations of power, gateways to other worlds. This meek, shy man with a passion for radio-controlled airplanes sang of dream realities where his fantasies came true, where the grim world he inhabited was transcended, even replaced. In Dreams makes this urge to cross into a better world explicit in the lyrics, but even in apparently mindless pop such as Pretty Woman Orbison describes an individual who, by the power of his will and growl, can force a woman to do his bidding- like a medium summoning the dead at a seance. There is always something slippery going on in Orbison’s songs, and he is not always opening the door he thinks he is. I’m not sure which door I’d stepped through, myself. There were no intoxicants in my system, but high on music and fire and the desert and the bottomless sky I was now somewhere else entirely. I spent over an hour wandering through the burning dream palaces of Roy Orbison. Then, I’m not sure what happened. Something moved me to step back from the pit of fire. I turned and saw a hill. It was blacker than the sand, blacker than the night sky, an eerie pyramid of negation in time and space. I was close to where Zoroaster, the world’s first apocalyptic prophet had heard God talking and founded a religion that had dominated Iran for a millennium before the Islamic conquest. Perhaps, perhaps if I climbed that mountain… well, what exactly?

I switched off the music and started walking. The hill was about half a mile away across a flat plain, but it seemed to take an eternity to reach it. It took even longer to climb. And once I reached the top I wondered what I was doing there: there was no hole in the sky through which I might perceive the color out of space. Mildly disappointed I descended and returned to the camp, where my friends were waiting.

Between my ears however, deep in the meat in my skull, Roy Orbison, the Great Shaman of the Kara Kum Desert now lurked, imprisoned forever, waiting to be released like a djinn from his bottle only when I played that song. And when I do, he summons the flames again, and the desert and the darkness, and I step into that burning dream palace, and spend a little more time wandering its corridors and rooms. And the world is transformed- for two minutes and fifty seconds, at least.

9 thoughts on “The Secret Afterlife of Roy Orbison”