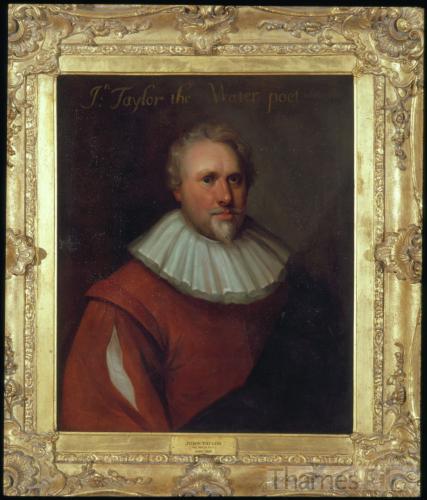 Fired by Jonathan Law’s recent reference to the man, Jonathon Green brings us another Hero of Slang. John Taylor: The Water Poet.

Taylor was born in Gloucester in 1578; his father may have been a barber-surgeon. He was educated in the town but abandoned school when he found Latin grammar too challenging. In the early 1590s he moved to London and was apprenticed to a waterman, one of those, in an era when the river offered only a single bridge, who rowed passengers between the two banks of the Thames,  Waterman were considered as a naval reserve and in 1596, after completing his apprenticeship, Taylor joined the 1596 expedition to Cadiz and a year later sailed to the Azores. His first job, other than rowing, was as a ‘bottleman’ at the Tower of London, rowing out to wine-carrying vessels and bringing back to the Tower governor his ‘fee’ of two large bottles per cargo. The job lasted until 1617, when a rival outbid him for the sinecure; Taylor memorialised it in his verses ‘Farewell to the Tower Bottles’ (1622). In 1613 he was made one of the King’s Watermen.

More intelligent and apparently more affable than most of his fellow boatmen, Taylor ingratiated himself with his clients, be they courtiers or the actors and writers who frequented the theatres of the Bankside. He also wrote verses. In 1612, styling himself the ‘Water Poet’, he published a selection as The Sculler, rowing from Tiber to Thames with his Boate laden with a hotch-potch, or Gallimawfrey of Sonnets, Satyres, and Epigrams. The mix of waterman and versifier struck a chord. His literary  career took off.

He was a superb self-publicist, one of the earliest of literary entrepreneurs. When one of The Sculler verses poked fun at the more established poet Thomas Coryate, the pair became embroiled in a pamphlet war. There were rival petitions to the King and one of Taylor’s pamphlets was burnt by the common hangman. It was all good for the Taylor brand. In 1614, after the writer William Fennor allegedly stood him up rather than attend a much-publicised ‘trial of wit’ at the Hope theatre, Taylor launched another paper war with Taylors Revenge: the Rimer William Fennor firkt, ferrited and finely fetchd ouer the Coales. ‘Come Sirrha, Rascall, off your clothes Sr, strip, / For my Satyrick whip shall make you skip…’ it begins.

In a 50-year long literary career Taylor took on any topic. Among his writings are Against cursing and swearing, The Begger, or the praise of beggers beggary and begging, A Dogge of Warre, A Kicksie Whinsie, or a Lerry cum Twang (‘Wherein John Taylor hath Satyrically suted seuen hundred and fifty of his bad debtors, that will not pay him for the returne of his journey from Scotland’), Laugh and be Fat and the group of ‘characters’ of A Bawd very modest, A Whore very honest, A Thief very true and A Hangman very necessary. His palindrome ‘Lewd did I live & evil did I dwel’ is one of the first recorded. He wrote a number of nonsense verses, notably Sir Gregory Nonsense His Newes from No-Place (1622), making himself one of the founding fathers of a strain of English writing that would include Edward Lear and Lewis Carroll.

As for slang, he was responsible for some 75 first recorded uses. One finds blind, bewitched, hanced, jug-bitten, out, scratched and pot-shaken or pot-shot all meaning drunk. To have a dirty nose is to hold one’s liquor; and he is the first to use whip the cat for vomit. A fool can be a lamb, a gull-finch, a shallow-pate or a lerrycometwang. Nonesense is moonshine. He pioneers the use of stall to mean a decoy, a moon for a month, file, to pick a pocket, rattler for a coach, and richard snary for a dictionary. Other first uses include feel, to caress sexually, not worth a button, nick, to catch or take unawares, buck, a bold, daring individual, and the exclamation sink me!

For publicity purposes none of this equalled his travels both in the UK and abroad, first sedulously advertised to obtain subscriptions, and subsequently written up to collect the money. The resulting work made him one of the earliest travel writers. His first trip was to Hamburg in 1617 and the next years would see ten more, including a walk to Edinburgh from London memorialised as The Pennylesse Pilgrimage: Taylor carried neither money nor supplies and depended on his wide range of acquaintances and admirers to keep him in food and shelter. There was a journey to Prague, where in the face of the Bohemian  revolt of Protestants against the Catholic Habsburgs, Taylor’s writings come over as prototype war reporting. At home he made trips via inland waterways or along the coast, using a waterman’s wherry, and once rowed some 40 miles in a boat of varnished brown paper, kept buoyant by eight inflated bullocks’ bladders, and powered by ‘oars’ made of giant dried fish tied to canes. It was written up as The Praise of Hempseed, with the voyage of Mr Roger Bird and the writer hereof in a boat made of brown-paper.

It all worked very well. Taylor moved from being a somewhat eccentric waterman-turned-poet, to something of a national institution.  He spent the 1630s writing, representing the Watermen to the Court and pursuing a variety of official business. He wrote about the centenarian Thomas Parr (supposed 152 in 1635), and put out a couple of guides to London taverns, plus articles offering information and timetables for carriers plying between London and the provinces.

In 1640 Charles I was replaced by parliamentary rule and the Civil War began. No revolutionary, Taylor continued writing political squibs from a royalist point of view. In Parliamentarian London this was foolish: he was attacked by an angry mob and later charged with sedition. He fled, taking refuge in the royalist headquarters in Oxford.

Taylor survived the war but his king did not, and former aristocratic patrons were in no position to help him. In 1647 he returned to London and took a lease on an alehouse near Covent Garden. He loyally named it the Crown: another bad move once the real crown’s holder lost his head in 1649. Taylor judiciously rechristened it The Poet’s Head, using his own portrait for a sign. He continued to write and to journey but while he could still find friends to feed him, his income had declined. He lived out his life in poverty, with gradually failing health. He died in December 1653.