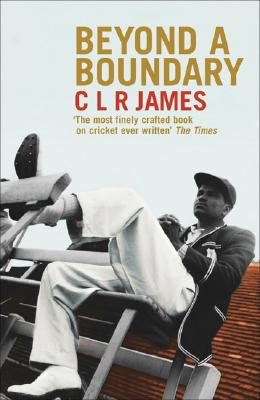 In his 1965 article ‘How to Build a Cricket Library’, John Arlott had Beyond a Boundary by CLR James as one of his essential twenty books on the game. Does anyone read it anymore? You can buy it here for a penny.

Arlott describes the ‘great sweep and depth’ of the book. Partly autobiographical, partly history – particularly of West Indies cricket – partly appreciation. Most readers recognise that the book is essentially about philosophy with the essential theme outlined by James in his preface – ‘what do they know of cricket who only cricket know?’

I’m sorry not to be able to find the print with a foreword by Mike Brearley who, rightly, acknowledges the book as both a classic of cricket literature and fascinating contribution to aesthetics and social history. James demands that cricket (and, to a lesser extent, sport in general) should not be apologised for but take its place as an art, ‘not a bastard or a poor relation but a full member of the community.’

Does cricket in the West Indies still act as an instrument of reform and political-social interaction as James argues? Apparently, more people saw the first day of the 2,000th test than saw the entire West Indies v India series earlier this year. The obituaries for test cricket outside of England and Australia are being prepared – how different it once was.

Would you like to recommend one of the countless great books that can now be bought online for a penny? Email editorial@thedabbler.co.uk with your review.

2 thoughts on “1p Book Review: Beyond a Boundary by CLR James”