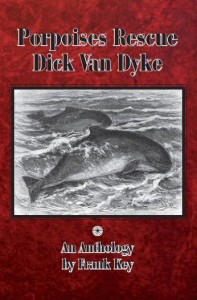 It was an ordinary day in November last year. By consulting my records I can see that I made no attempt to log the rainfall, temperature, or other weather phenomena, nor did I list the birds seen swooping in the sky nor the ingredients of my breakfast. I did not even make note of the number of eggs counted by George Orwell on that day seventy years before. One thing I did do, however, was to read bits and bobs in a Berliner format rag called The Guardian. And one particular bit, or bob, caught my attention. It was this:

On screen, Dick Van Dyke has been rescued from untimely death by flying cars and magical nannies. Off screen, the veteran star of Chitty Chitty Bang Bang and Mary Poppins had to rely on the help of a pod of porpoises after apparently dozing off aboard his surfboard. “I’m not kidding,” he said afterwards.

Van Dyke’s ordeal began during an ill-fated trip to his local beach. “I woke up out of sight of land,” the 84-year-old actor told Craig Ferguson on his TV chat show. “I started paddling with the swells and I started seeing fins swimming around me and I thought ‘I’m dead!'”

Van Dyke was wrong. “They turned out to be porpoises,” he said. “And they pushed me all the way to shore.” The porpoises were unavailable for comment.

Now, like everyone throughout Western Civilisation, I was aware of the film roles alluded to in the story, I knew that Dick Van Dyke had amassed a massive fortune by registering his initials so that he receives 50 cents for every DVD bought or rented anywhere in the world, and I had read, and reread, his 1970 book Faith, Hope, And Hilarity many times. In fact, I keep a copy on my bedside table in the event that I am jolted awake in the middle of the night by a spiritual panic attack. What was new to me, however, was the revelation that the octogenarian actor was given to paddling on his surfboard out into the vast and merciless Pacific Ocean. Had no one ever told him that worse things happen at sea?

The more I thought about the story, the more I felt it cried out for some kind of treatment. A novel? A stage musical? A low-budget art house film? A Wagnerian Gesamtkunstwerk? Obviously, I could turn my hand to any of these with practised ease, but I could not for the life of me work out the best way to approach it. The elements of the tale – elderly screen icon, imperilment on the high seas, porpoises – made for a heady brew indeed. How could I do it justice?

As ever, when faced with such a quandary, I sought the advice of a Jesuit. But on this occasion my old Father Confessor, Ninian Tonguelash S.J., could not help me. With typically Jesuitical casuistry, he claimed not to know who Dick Van Dyke was, at the same time as condemning his performance as a sweeper of chimneys in Mary Poppins (Robert Stevenson, 1964) as “unholy and abominable and very likely the work of Beelzebub”.

Winter closed in, the nights were long, I wore mufflings to stave off the cold. And still the key to the tale eluded me. Eventually, I gave up the ghost, gathered together a ragbag of yarns from my radio show on ResonanceFM, and cobbled those into a paperback instead. Chim-chim-cheroo!