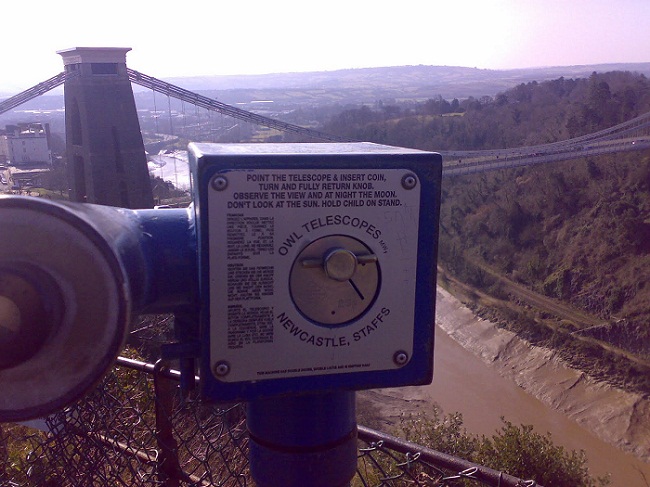 A little while ago I came across the above telescope, which enables the public to enjoy views across the Clifton Suspension Bridge, but which more importantly boasts this heartbreaking poem:

Point the telescope & insert coin,
Turn and fully return knob.
Observe the View and at night the Moon.
Don’t look at the Sun. Hold child on stand.

It hardly needs me to point out the reference to the Book of Ecclesiastes in the second line’s lyrical flourish (“Turn and fully return”) nor the hopeless ‘optimism’ of “and at night the Moon”. As for the double-blow of the concluding line, if there is anywhere in this world a man cold-blooded enough to read it aloud with dry eye and lumpless throat, I’ve yet to meet him and I’m not sure I’d want to.

I immediately sent it to irregular Dabbler Bryan Appleyard, himself a keen student of coin-operated telescope poems who had previously posted an analysis of a shattering example at Wells-next-the-Sea in Norfolk (The harsh irony of that ‘enjoy the view’ borders on the inhuman. The second stanza makes hot tears spurt…). Appleyard suggested we urgently begin work on a compendium of Scopepoems entitled Don’t Look at the Sun. So far the collection amounts to two, so do send them in if you have any.

The Clifton Scopepoem is a fine example of ‘found poetry’ – the phenomenon whereby text from prosaic sources can be reframed as poems. A well-known example is this passage from William Whewell’s 1819 work An Elementary Treatise on Mechanics:

And hence no force, however great,
can stretch a cord, however fine,
into a horizontal line
that shall be absolutely straight.

Apparently the miserable sod changed the wording when this was pointed out to him.

The absolute apotheosis of the found poetry phenomenon is BBC Radio 4’s Shipping Forecast. Read in a soporific rhythm, a typical poem might be:

In a 2003 article for Slate, waggishly entitled The Poetry of D.H. Rumsfeld: Recent works by the secretary of defense, Hart Seely turned the pronouncements of Donald Rumsfeld into verse, including:

Seely’s idea here, of course, was to poke fun, though I would argue that Rumsfeld’s famous ‘known unknowns’ speech actually did us a tremendous service in clarifying hitherto vague epistemic categories. An even better example from Rumsfeld, to my mind, is this devastating example of existential crisis, which has clear echoes of Talking Heads’ Once in a Lifetime…

A Confession
Once in a while,
I’m standing here, doing something.
And I think,
“What in the world am I doing here?”
It’s a big surprise.