An unequivocal solo cream bun for quiz-whizz Adelephant this week. We might have to set up some sort of league table for these super-solvers. Anyway, well done to her, and thanks to Jonathan for a brilliantly fiendish question. (And also to John Halliwell for a far superior if incorrect answer). Click continue if you give up. 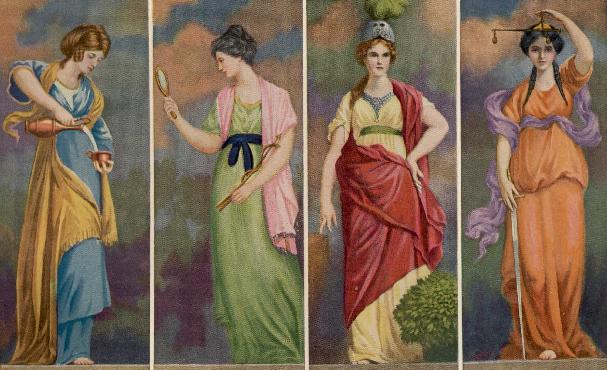 What links Jane Parker’s other daughter to a son of the manse, Sid Vicious by another name, fox’s bones, and the place to go clubbing in Brisbane? The answer involves the surviving resident of Utopia Ltd, Stackton Tressell, and a football team who might go to the kitchen but forget why …

The answer is the four Cardinal Virtues of Classical and Christian tradition: namely, Prudence, Justice, Temperance, and Fortitude.

According to this Catholic site, “The cardinal virtues are the four principal moral virtues. The English word cardinal comes from the Latin word cardo, which means ‘hinge’. All other virtues hinge on these four … Unlike the theological virtues, which are the gifts of God through grace, the four cardinal virtues can be practiced by anyone; thus, they represent the foundation of natural morality.”

If this sounds a little too Lenten and exemplary, the detailed answers are more carnivalesque …

Jane Parker’s other daughter is Prudence Farrow, sister of the more famous Mia and alleged inspiration for the Beatles’ song Dear Prudence: their mother was Maureen O’Sullivan, who played Jane (Parker) in the old Tarzan films. The son of the manse is, of course, dear old Gordon Brown, who was always banging on about ‘prudence’ in earlier and happier days.

As we all know, Sid Vicious’s other name is Sid Justice (we’re talking about Sid Vicious the six-times world champion wrestler, OK?). Born Sid Eudy, he used the ‘Vicious’ moniker in World Championship bouts and ‘Justice’ in the World Wrestling Federation.

The nightclub district of Brisbane is named Fortitude Valley, after SS Fortitude, the ship that brought the first free settlers there in the 1840s. Ongoing disputes between residents and clubbers led the government of Queensland to designate Fortitude Valley Australia’s first special entertainment precinct in 2005.

The surviving resident of Utopia Ltd, in the delightful village of Stackton Tressell, is Dr Evadne Hinge – Dame Hilda Bracket, aka Patrick Fyffe, having passed away in 2002 . As noted, the word ‘cardinal’ translates literally as ‘hinge’.

Finally, it was Douglas Adams in The Meaning of Liff who observed that the proper term for going to the kitchen but forgetting why is ‘woking’: Woking FC are known to their fans as the ‘Cardinals’.