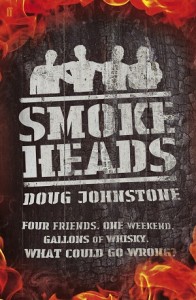 His latest novel, Smokeheads, relates the catastrophic whisky and cocaine-fuelled lad’s weekend of four Edinburgh friends on Islay. It’s unlikely to impress the local tourist board, police force or even the island’s distillers. Their current mantra enjoins us piously to ‘enjoy our products responsibly’; suffice it to say that Johnstone’s characters don’t.

Whisky is consumed on a heroic scale and the body count exceeds the number of days in this disastrous long weekend. What three of the characters believe to be nothing more than a hedonistic jaunt (the fourth has an agenda revealed part way through the story) turns into a fast-moving if less than credible tale of corrupt constabulary, illicit distilling and gruesome death. The hint of some kinky sex is never quite fulfilled – you’ll have to wait for the movie for that.

It’s stretching the reader’s generosity to describe this as a full-length novel. Though nearly 300 pages in length, the publisher has resorted to the increasingly threadbare trick of large type, lots of leading and a generous smattering of blank pages between the annoyingly short chapters to bulk out the book and justify the £12.99 cover price. Johnstone pads out the text with plenty of whisky fillings, adding bulk but little flavour and, if not completed on the ferry journey to Islay, the average Dabbler reader would have reached the end long before Caledonian MacBrayne returned them to the mainland. In truth, Smokeheads reads more like a film pitch – Deliverance meets The Wicker Man – and I have little doubt that a treatment is being drafted even now.

For all that though, Smokeheads has a page-turning energy that can’t be denied. The characters may be sketchily drawn but the rapid-fire action draws the reader on and past the plot’s implausibility to the conveniently glib denouement.

If Smokeheads were a whisky, I’d praise the nose, chew over the body but note that the finish fades away fast.