Now that I’ve reached the age where I’ve come to terms with life turning inexorably from carefree abandon into a sort of slow accumulation of lint, I find myself experiencing strange new feelings. Walking into the tools section of the DIY store imbues me with a thrilling promise of untapped power. Night brings dreams of abundant kitchen gardens, and almost any programme about farming makes me want to sit by the TV and stroke the screen. So when my wife interrupts the Antiques Roadshow one Sunday to suggest that we go to Hugh Fearnley-Whittingstall’s River Cottage Canteen I carefully lay down the Farrow and Ball paint swatch I have been studying and agree we should go forthwith.

Axminster on a Saturday night is a dark and lonely place. Lime green Citroen Saxos cruise through the streets like sharks, bassbins blazing. Through the darkness little huddles of middle class survivors scurry, heads down across the town square on their way to the The Canteen, a beacon of light shining out from the row of empty shops. I was already well aware that there’s little reality in HFW’s beguiling yarn of happy smiley country folk (none of them play banjos for a start), but weekend life for the inhabitants of dying Axminster seems far away from the TV idyll. Inside, we walk through the daytime café and pass the kitchen where mutton-chopped chef Tim is chuntering around behind the heating lamps. Familiar to those who have seen the TV show, the rear dining area is a large sort of shed, filled with earnest Bodenites eager to experience their little slice of middle class nirvana. Huge photos of muddy vegetables and happy children line the walls like stained glass windows in this temple to the good life. It’s all a bit Nazi. 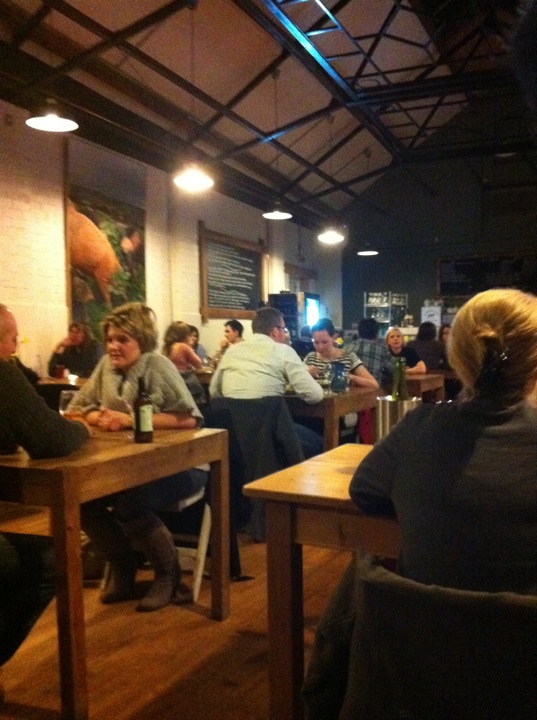 I feel a wave of anarchism come over me, I hate the beatific faces of the kids in the photos. I hate the menus in little ikky kiddie writing and the innocent smoothie style blurb, it all seems so forced. And I’m wondering why we’ve travelled all this way to go to a restaurant run by a guy who hardly ever sets foot in the place. But, apart from being bourgeois enough to be charmed by the ramshackle service, I guess I’m not the target audience.

To begin with our waitress proffers an amuse-bouche of blinis with slivers of raw mackerel and horseradish cream. I’m generally not a fan of mackerel’s oily fishreek, but fresh, like this is, it’s actually really good. The mains of hoggett and 5hr roast pork belly are tasty, although nothing above what you would expect to find in any half decent pub these days. It is the puddings that are most disappointing; straight out of the fridge, the date cake is a stodgy clag, and the vanilla yoghurt panna cotta seems equally premade and lifeless. I get very little feeling of genuine care and flair in the food, which is a shame because the one thing I had hoped for was to taste simple ingredients elevated to a higher standard with chefly love and attention. On balance I expect HFW would argue that he’s trying to run a reasonably priced place and that what can you expect, it’s a canteen, not a Michelin-starred eatery.

If this all sounds too negative, I must say that it wasn’t all bad. It was a pleasant enough evening in a buzzy venue. We had fun. And as mentioned, the service was charmingly amateur. I actually enjoyed myself and my wife was as happy as Nigel Slater with an enormous pack of butter. But on reflection I was left with an uneasy feeling. Everyone who makes the effort to trek down to The Canteen is helping HFW cash in on the best wheeze imaginable – browbeat your middle class fans into paroxysms of guilt about not eating enough sustainable food…and then get them to pay restaurant prices for the cheapest and most lowly cuts of meat and fish available. And the customers love him for doing it – they are grateful. Hugh, who gets paid to make a TV show to advertise a restaurant that he rarely visits, is laughing all the way to the bank.