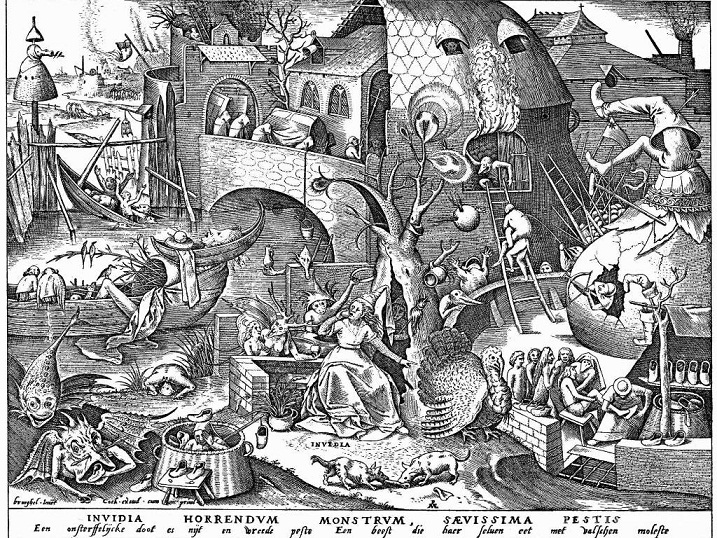 Jonathon Green – visit his website here – is the English language’s leading lexicographer of slang. His Green’s Dictionary of Slang is quite simply the most comprehensive and authorative work on slang ever published. Today Jonathon continues his epic survey of the Seven Deadly Sins of Slang with Envy…

And tell me, in the modesty of honour,
Why you have given me such clear lights of favour;
Bade me come smiling and cross-garter’d to you;
To put on yellow stockings…

Now this is interesting. Not just Malvolio and his wretched fashion sense, at which we shall arrive, but as regards sins, in this case envy, and slang’s representation thereof. As I’ve already noted, and the ever-developing word-list continues to make clear, slang doesn’t really do abstracts.  It’s good with the concrete: you are stupid, they are fat, she’s sexy, I am tough, we are all pissed as farts. But emotions, these things that have no form, what to do about them? A comment on last week’s look at wrath suggested that slang’s solution is reification, that abstracts have to be turned into allegories, like medieval illustration. The emotion stops swirling about the brain, and gets acted out.  Slang is not just a lexis of synonymy, but of metaphor too.

The problem with envy, is that slang barely goes there at all. The word comes from the French envie and ultimately Latin’s invidia, to look maliciously upon. Just to be cussed envy in French is jalousie, which also means a form of window blind (when by the way it’s not a vasistas, which calques the German ‘wass is das?’ as uttered by invading Prussians on encountering their first Venetian blinds). There are some interesting early English terms. Onde, from Saxon ando hurt, insult, or frustration (ando also leads to indling, jealous); evest, a negative form of este, pleasure or grace;  teen, from Old English téona masculine hurt or trouble; wroke, from Dutch wrok, hatred or spite; and maugre, literally ‘ill favour’ and which links to the modern French malgré, despite. All good negative stuff and out with the broadsword for a bit if hack ‘n’ slay.

But slang fails us. What do we have? There’s the Irish aginner, who invariably is, taking their oppositional stance out of envy or spite. There’s the obscure dine, meaning spite; a dog or dog’s trick, which was a treacherous or spiteful act; and Australia’s rancorous nark, which makes one narked with someone else. Francis Grose offered the hell-cat, which as well as meaning ‘a lewd, bawdy parson’, also stood for a spiteful person. (Of a woman, and meaning termagent – itself once a synonym for Mohammad – it remains standard). From the West Indies comes the red eye (to have the red eye for is to be obsessed with) and bad-mind, envious of or ill-wishing. Then there’s a triplet of phrases: the Australian half your luck! (i.e  ‘I wish I had…’) and the quasi-Yiddish I should be so lucky with its cohort I should have their worries. Avowedly empathetic they all  come over as grudgingly restrained spite.

With envy unenviable we move to jealousy which is linked to Middle English gelos and modern French jaloux. The root is Latin zēl-us  and before that Greek ζῆλος and both mean emulation, zeal, and by extension jealousy.  One use of zealous was once a variant of jealous too. The zelo– root gives the lost zelotyping  which may sound like an early attempt at word processing but which around 1650 meant literally ‘striking with zeal’ and thence jealous. (There were zelotypists as well: they were fanatics). The past also offers indling, from eyndill, to be jealous, and which like onde, is linked to ando.

Slang does better with jealousy. For start there is the yellow thing. The usual association is of course green and thus Shakespeare’s coinage ‘the green-eyed monster’. This green is not that of naïveté or gullibility, which comes from the innocent shoots of spring, but comes from one’s ‘green’ or at least pallid complexion, which in the world of medieval ‘humours’ indicated jealousy and ill-humour. But yellow works too, and seems to be cognate with jaundiced, which returns us to the complexion: a yellowish tinge suggesting jealousy or spleen. Thus Malvolio, literally ‘I wish ill’, is en-yellowed to point up his jaundiced mind and provides, apparently, the first fashion joke in literature. Malvolio has the yellows, jealousy, while to wear yellow hose meant to be jealous through to the 19th century.

What Olivia has the hapless Malvolio performing is the hurting dance, and other terms for jealousy include the vapors, which one can catch (possibly linked to SE vapours, a fantasy, a foolish boast). Mainly it’s about adjectives: one can be jelly, sick, smoky (from the obsolete smoke, to suspect)  and chippy, from that chip perched on one’s shoulder. Snaky refers back to Eden and means underhand more than it does jealous. One can be a blossom, which meant a strait-laced or jealous person but has no known background. Finally there’s the West Indian wanga gut which stands for greediness or jealousy and may be based on wonga, money and one’s gut, i.e. one is ‘hungry’ for cash.

If one extends envy to simple malice, the West Indies is pleasingly prolific. There is the bad-mind, spite, which gives both verb and adjective. A malicious talker is a badmouth (which probably comes from standard English but one should bear in mind the Mandingo dajugu, bad mouth); malicious rumour-mongering can be kass kass, either from a reduplication of curse, or from Twi kasakasa, to dispute verbally and cote-si-cote-la from the French meaning ‘on this side and on the other’, and in which the gossip tends to the amusing rather than the outright cruel. The catchar (from Bhojpuri khachchar, a mule) has no extenuation: this one attempts to interfere maliciously in a couple’s love affair and extends to anyone who fails to ‘mind their own business’. An all-purpose gossip is mout-hab-nuttin-fe-do, i.e. the ‘mouth has nothing (better) to do’. Roro, from  French ronron, whirring, buzzing is malicious gossip; thus to  put someone in roro is to slander or to cause someone trouble.

The Caribbean does not have a monopoly. Malicious chatterers are everywhere. Dirt is another synonym for slander, and gives the dirt farm, anywhere that malicious talk is ‘cultivated’,  to blow, pitch or dish (out) the dirt; to do dirt on or to is to harm, to injure deliberately – usually with words. Dish, tout court, can mean to to gossip maliciously, to tell tales and gives the gay dish queen, another take on the malicious gossip.

There is chaff-cutter (from chaff, to tease), the crony which means a tough old boiling chicken and thence an ‘old hen’ and thus an ill-tempered or malicious old woman; culinary imagery also underpins the stewer. We have the earwig, the stirrer, the mixer, the gunner (from 17th century gun, a strange and unaccountable story), a lemon hand, who is ‘bitter’, and the mudslinger (who slings mud). Shit, metaphorically, means nonsense and thus slander, and gives the shit-disturber, shitman and shit-stirrer. And rhyming slang offers wicked witch, i.e. a bitch.

And the bitch is also an old cat. Miaow!