My friend Mick Wall turned me on to Filth. Reading that sentence back I see that there are a few ambiguities in it, admittedly, but those aside, he did. ‘Have you read Filth?’ he asked one day when Irvine Welsh’s name came up. I hadn’t, but because Mick has rarely led me astray in literary matters, I did, right away.

Everyone should have a friend like Mick. We met when I was just out of college and had started working at a music mag where he was the star writer, getting the stories that all the other writers both wanted and envied. He had no reason to befriend me but he did. This was back at the end of the 1980s in London and he gave me a bit of an education in low life literature, showing me around the few places that sold Charles Bukowski’s books – the lovely Black Sparrow editions that sit on the shelves behind me – and then John Fante, and Celine; he practically forced me to buy Money – I picked it up on Waterloo Station one night on the way home, and it’s been my favourite book ever since. Mick has it in a first edition that I covet to this day. There’s lots more since, too, and not just the low life stuff either, but he understood what I should read when, which is important.

Anyway, Filth (available for 1p here). Along with everyone else, I’d read Trainspotting – at the time, in our line of work, not reading Trainspotting would have been like not having heard Appetite For Destruction or something – but then had sort of lost track of Irvine Welsh. I’d been put off of Filth by its cover, which had a cartoon of a pig in a policeman’s hat set on a lurid, coloured background. It seemed lowest common denominator. Having returned to the book many times since, I see that it is somehow appropriate, because Filth is a cartoonish and grotesque black comedy about a corrupt detective, but it’s a bit more than that, too. 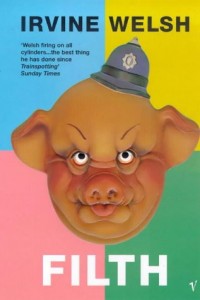 Most importantly for a comedy, it is funny. Filth is set in Edinburgh and narrated by Bruce Robertson, a macho Protestant copper who, when the book opens, is being inconvenienced by the murder of a black tourist. The case, and Welsh’s vision of Edinburgh, unwinds through Robertson’s eyes, and what eyes they are. His main focus is a forthcoming holiday to Amsterdam with his hapless, henpecked mate Bladesy, so he is quickly off into one of Edinburgh’s Schemes to fit up a couple of druggies for the killing before his leave can be cancelled. At first it seems quite simple, but as the press become interested in the murder and its political implications, Robertson’s boss, Bob Toal, is forced into appointing a female officer to the investigation. Around this Welsh wraps several subplots: Bruce is infested with a tapeworm which gradually reveals the true circumstances of his life; a DCI job is going and Bruce presumes it’s his; Toal is writing a screenplay that Bruce is determined to destroy; Bruce is planning an affair with Bladesy’s wife and is posing as a stalker that he can later rescue her from. Yet plot in this novel is just background hum. Rather, like Money, it’s a voice novel, and as Smart Mart noted, when you write one of those, ‘all of your eggs are in one basket’. Welsh, admittedly with knowledge of his constituency, bets the house on Bruce, a vindictive, sexually sadistic misanthropic alcoholic, and on his voice, which is offered in phonetic dialect. Filth’s dark and sullen power comes from this – Welsh is a fearless writer, and they’re always the best kind. It is a novel of sordid events and sordid lives, and yet there is something about Bruce Robertson that provokes a gleeful delight, especially in the first half of the book when his star is ascendant.

What pushes Filth beyond broad comedy is Welsh’s Edinburgh, a city divided by religion and money. In one half are Robertson and the police, all Freemasons [ranks in the station are subverted by ranks in the Lodge], and in the other the Catholics and ‘Schemies’. In one telling scene, Bruce refers to a Hibs versus Hearts derby in which a winning Hibs goal is chalked off by a linesman from his Lodge.

Filth is imperfect – what book isn’t? The murderer’s identity is obvious from the start; Bruce’s childhood traumas and psychological dysfunctions come straight from the textbook, yet the humour is lethal and addictive. Bruce’s neighbour, a fading, much divorced professional footballer called Tom Stronach, appears in a series of glorious cameos, and the trip to Amsterdam with Bladesy is priceless. Welsh has a lot of fun too with Bob Toal’s screenplay, thuddingly titled ‘City Of Darkness’, which is a desperate middle-aged man’s fantasy. His eye and ear are acute, especially for discomfort.

There is talk of a film version soon, but unless they cast Jerry Sadowitz as Bruce, it’s hard to see it succeeding. Voice novels are in a way the purest form as they are the most difficult to transfer into another medium. That’s because they’re already at home. In Filth, there’s a demonic energy at play that you must read to experience.

Jon is the author of Muscle and (the brilliant and unforgettable – Ed) The Years of the Locust.

Do you want to recommend a book that can be bought for a penny online? Email your nomination and review to editorial@thedabbler.co.uk