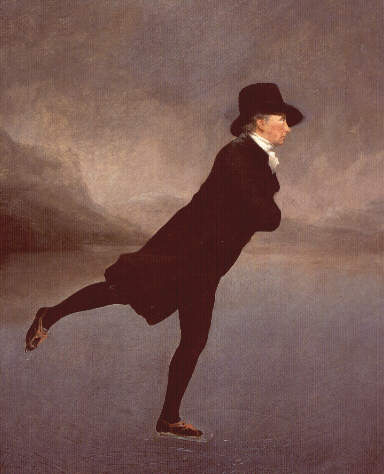 For a Burns Night special, we take a break from London’s National Gallery and head to Edinburgh in our series looking at artistic national treasures…

The Skating Minister or, to give it its full title, The Reverend Robert Walker Skating on Duddingston Loch (c.1795) is a much-loved painting, and indeed, who could fail to love it? Certainly it’s the one I’d steal from the excellent and manageable-in-a-morning National Gallery of Scotland (though I’d be tempted by Quiller Orchardson’s scene of Voltaire yelling his head off at some fops – a terrific painting which for some reason is almost unrepresented online).

There’s a school of thought that says the duty of art is to bring joy. It’s a small, eccentric, suspicious little school and most sensible people give it a wide berth, as with Steiner Schools. Nonetheless The Skating Minister is an exceedingly joyful painting, guaranteed to raise a smile.

Obviously there’s the fact that the skater is a man o’ the cloth, soberly dressed and with perfectly benign expression, yet executing a manoeuvre the grace and poise of which Jane Torvill herself would be proud. (The Reverend Robert Walker, minister of the Canongate Kirk, was a member of the Edinburgh Skating Club, the first figure skating club formed anywhere in the world.)

Such incongruities are always pleasing, but the interesting thing about this painting is that it is so joyful and lively despite such drab colours: a black silhouette against murk. The background of frozen loch, mountain and sky is so muted as to be almost no-background; all the joie de vivre comes from the form – in which striking respect it reminds me, if we can skip south again, of George Stubbs’ equally-loved Whistlejacket.

The Skating Minister is an anomaly in Sir Henry Raeburn’s work –a full-figure miniature whereas he usually painted life-size portraits – and about five years ago there was a serious debate about whether it was in fact the work of French painter Henri-Pierre Danloux, who was a master of depicting movement and happened to be in Edinburgh during the 1790s. It’s now largely accepted that The Skating Minister is indeed correctly attributed to Raeburn, but you can read a summary of the arguments on both sides here.