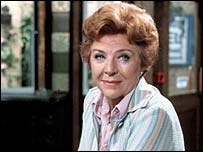 I like watching television, but I think it is an entirely frivolous activity. I don’t believe it works as an educational tool (who hasn’t had the conversation that goes like this: “Did you see that amazing Attenborough programme last night. It was in … I’ve forgotten exactly which country, but it was about this animal, I can’t remember what it’s name was but it was really cute and apparently there are only, I’m not sure, but not very many, because the locals or a big mining company or forestry or something like that want to something or other et cetera et cetera) and I think it has rarely created anything approaching great art.

That’s why I was so pleased when, years ago, I found in the newspaper, amongst a load of self-obsessed recollections of first love, Craig Brown’s account of his first infatuation, which was with Meg, the proprietor of the Crossroads Motel (above):

Crossroads brought my family together. We didn’t have any other interests in common, but at 5:25 pm the cry would go out: “Crossroads! Crossroads!” And from around the house everyone would come running. I was about 10 when I started watching, and from then until I finished university, Noele Gordon – a.k.a. Meg Richardson, later Meg Mortimer – was a central part of my existence.

She was just such a coper. I picture her now, with her cropped red hair, standing behind the reception desk in that foyer with the word “Welcome!” on the wall in four different languages. “Crossroads Motel, can I help you?” She said, over and over again. The motel would often catch fire, but she coped. Her staff – Jim Baines, Vera Downend, Wee Shughie – were very, very difficult, but she coped. Her stepson Chris not only went away to Switzerland and came back played by a different actor – which must have been a shock – but joined a gang of international terrorists in kidnapping his own father. Still she coped. In fact, she positively glided through each crisis, wearing one of her three expressions: concerned, relieved, or far away (the one with a slight smile).

I knew more about Meg/Noele than I did about my own family. I watched her get married – I still have the video of that episode, which is, in its entirety, simply a marriage service. Nothing dramatic happens, but you do get to see the congregation singing all the hymns. (Larry Grayson, who was Noele’s great friend, makes an appearance as her chauffeur, though I was never quite sure what he was meant to be doing there. Was he being funny? Was he simply being a chauffeur?) And I was always fascinated by Noele’s real-life mother, whom she lived with. She was called Jockey.

I remember being terribly distressed when a friend of mine once said: “that woman’s face is like anyone else’s bottom”; I didn’t think she was ugly. And I was most upset when the daily Star ran a competition asking readers how they would like to get rid of Noele: the winning entry was “beat her to death with a frying pan”. Despite the strong emotions, ours was a platonic affair, based on respect rather than passion. For that reason, it didn’t affect my taste in women later in life. I’ve never been out with someone that sensible – or, indeed, anyone who ran a motel.

Crossroads is exactly what television is good at, I think – mindless, cheerful rubbish. What I don’t think it should attempt though is the things it calls “classic serials”, those big budget series where a great novel is taken and hacked up and reduced to fit the dimensions of telly’s limited little world. I’ve written at length about this on my own blog, but essentially what I believe happens when Tolstoy or Dickens or George Eliot are adapted is you get storytelling as sophisticated as this.