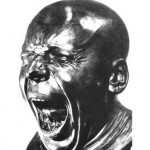 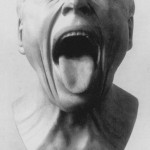 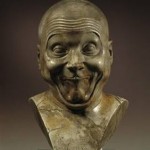 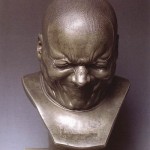 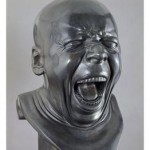 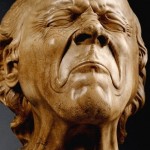 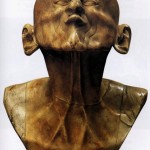 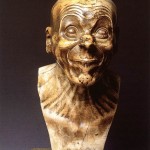 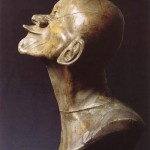 Concluding our Germany/Beeb Wednesday, these alarming, life-size bronzes have featured in two BBC Four programmes recently: Laura Cumming’s Ego: The Strange and Wonderful World of Self-Portraits; and the first episode of Andrew Graham-Dixon’s The Art of Germany series.

Franz Xaver Messerschmidt was a successful court sculptor, who created over 50 of these grimacing, gurning self-portraits towards the end of his life. Sculpted in the last decades of the 18th Century, they seem much more modern – specifically, they look very 20th Century. It’s quite hard to believe they are pre-Freud, as the natural thought is that they are manifestations of Messerschmidt’s ‘id’. Graham-Dixon even (rather dubiously) sees them as pre-figuring Germany’s 20th Century horrors.

Certainly they are open to interpretation. According to the German author Friedrich Nicolai, who visited Messerschmidt in 1781, the sculptor suffered constant pain (probably Crohn’s disease), from which he attempted to distract himself by administering specific pinches to his own ribs. Observing the resultant expressions in the mirror inspired him begin a project to record the 64 ‘canonical grimaces’ of human physiognomy.

But the artist also admitted to more disturbing influences. He had become interested in necromancy and other dark matters, including the arcane theology of Trismegistus. Messerschmidt claimed that his character heads had aroused the anger of “the Spirit of Proportion”, which subsequently visited him at night and inflicted humiliating tortures on him – the agony of which inspired further hideous self-portraits.