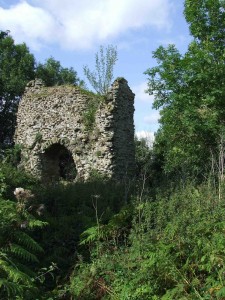 Philip Wilkinson – of the English Buildings Blog –  is the author of over 40 books, including The English Buildings Book, and a new book called The High Street, written in conjunction with a major BBC TV series (episode 2 is showing on BBC1 tomorrow night at 9pm). In this series of posts, Philip talks us through some overlooked architectural gems…

I grew up visiting castles. As a child I loved their otherness, and got as good at identifying shell keeps and barbicans as imagining Sir Nigel and Ivanhoe rampaging around inside. Like old churches, medieval castles were a rapid and accessible escape route into the rich parallel world of history.

Ancient as they were, the castles of my youth had, for the most part, a particular quality that wasn’t much to do with their medieval origins. They were nearly all in the care of the Ministry of Public Building and Works. You found them by following official governmental signs. Once there, you found your way round using smaller signs and a guidebook, bound in blue and, if you were lucky, equipped with a fold-out map stuck into the back of the booklet. You unfolded this rather beautifully drawn map, and tried to work out where you were while it tried to blow away in the wind or invert itself like a flimsy umbrella. And it was quite easy to see where you were going because everything was so cared for. Lawns were manicured, paths were well laid, walls were pointed.

I’m very grateful to the Ministry of Public Building and Works, later the Department of the Environment, later English Heritage, for looking after our castles in this way, and for giving me enjoyment and education in equal measure. And having spent some time recently exploring ruins in Germany (where information, even in German, seemed puzzlingly thin on the ground) and the Czech Republic (where we had to tag along to guided tours conducted, naturally enough, in Czech), I’m newly aware of the value and interest of all that information I absorbed as I went round castles, guidebook in hand. But weren’t those English castles all a bit too kempt? And how much did those neat lawns and concrete paths have to do with medieval history? There is another way: welcome to Wigmore Castle.

The fragmentary 12th-century ruins of Wigmore Castle are on a hill overlooking the Welsh-English border. When conservators looked at how best to preserve these isolated towers, arches, and bits of wall a few years ago, they decided to stabilize the masonry but not to clean up the growths of plant and bush that have invaded the place over the last few centuries. So an expert in nature conservation worked alongside those in building conservation.

The result is wonderful. Coming here you get a sense that you’re exploring as walls and towers loom out of the undergrowth. There are paths, but they’re narrow, twisting, and sometimes a bit overgrown. I was sorry I didn’t put a field guide to plants and flowers in the car before we left home, but I did my best identifying flowers and well as fragments of masonry. And while I was finding bits of tower and curtain wall, my foraging wife found ripe blackberries for us to eat. Be warned: with its steep steps and muddy paths this isn’t a place for people who are unsteady on their legs. But if you can put up with the rough terrain, it’s a good place to come to witness the flowering of a ruin.