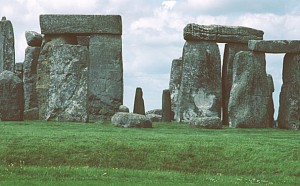 Following on from Ian’s post on Stonehenge this morning, we have a guest post from author Alexandra Harris. Alex teaches literature at the University of Liverpool and writes about all kinds of art, from novels and paintings to cookery and gardening.

She has just written an excellent new book called Romantic Moderns. Nominated for the Guardian First Book Award, It’s about Englishness and the arts in the mid-twentieth century, and here she kindly allows us to reproduce an excerpt about the beguiling effects of Stonehenge on modern British art….

Stonehenge is a good example of how a particular landmark in the English countryside could inspire different kinds of appreciation. Its image was particularly potent because it signified strength and endurance while at the same time being vulnerable, and seeming to stand for a vulnerable England. Like so many areas, Salisbury Plain faced the prospect of development. The stone circle itself was under government protection, but the area surrounding it was still in private hands by the late 1920s and liable to be built on at any moment. A Stonehenge Cafe had already sprung up to take advantage of the tourist trade (it is visible in photographs from 1927), and commentators anxiously surmised that other buildings would follow. A major appeal was launched, backed by both Stanley Baldwin and Ramsay McDonald, to buy the surrounding area and place it in the safe-keeping of the National Trust. The rhetoric of the appeal was stirring:

“The solitude of Stonehenge should be restored and precautions taken to ensure that our posterity will see it against the sky in the lonely majesty before which our ancestors have stood in awe throughout all our recorded history.”

Money came in fast; modernity in the form of cafes and carparks was (for the moment) fended off. But Stonehenge was nonetheless a modern icon. For centuries the ancient stones had been at the forefront of modern art. The structures and proportions favoured by the Neoliths had been borrowed by architects like John Nash in the eighteenth-century to give gravitas to his classical façades in Bath. The columns and pediments derived from Rome of course, but they derived from early England too. And then the stones became Romantic: for Turner they glistened like a golden city in shafts of sunlight; Constable saw them touched by a rainbow from a tumultuous sky, as if still making the covenant with the gods first established thousands of years before. Between the wars, Stonehenge continued its protean career.

Paul Nash found equivalents for the megaliths, replacing standing stones with geometric forms and thereby declaring that they could be read as abstract art. Measuring Salisbury Plain against a Miró painting, Piper suggested similar affinities. Advanced architectural thinkers admired the same formal properties in the stones that had appealed to the builders at Bath. Among the pictures of purist villas and abstract constructions in art journal Circle a series of Stonehenge photographs appeared. Two were by the German writer Carola Giedion-Welcker, a specialist on contemporary sculpture, and a third was by Walter Gropius, the leader of the Bauhaus. Both photographers went up close and stayed near to the ground, feeling the weight of the stones rising above them. Barbara Hepworth, designing the layout for Circle, placed these pictures after her own essay on sculpture which took the understanding of form and gravity to be the primary work of the sculptor. Neolithic man, it seemed, had been an unrivalled master of form, and his influence can be clearly felt in Hepworth’s work from this time. Though they were only a metre high, she saw her Two Forms in Echelon (1938) as monuments in the landscape: ‘the sculpture has an upward growth but the two monoliths make a closed composition,’ she said, which creates a space of ‘quietness’ out in the open. 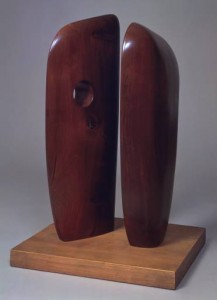 Here were monoliths you could live with. Hepworth imagined the sculpture in a garden setting, domesticating the sarsens while preserving their power. Henry Moore, too, wanted the monoliths in his garden. When he bought an area of land large enough to position his sculptures out of doors he rejoiced that they looked ‘like a bit of Stonehenge’. He had first seen Stonehenge by night in 1921, in the days when you could wander alone through the stones and watch the moon. The experience stayed with him all his life (he recalled as an elderly man the ‘mysterious depths’ of those moonlit stones), and the magnetic equilibrium of his large sculptures in landscape were part of his life-long tribute to the ancient builders. Moore, Betjeman, Piper, Hepworth, Gropius: pre-history had an impressive list of modern advocates appropriating its monuments for their various visions of England.