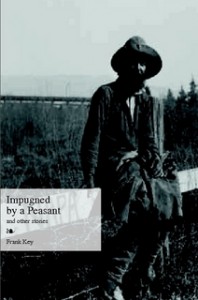 Thus begins I Had a Hammer, one of a very large number of very short tales, originally published on the Hooting Yard blog or broadcast on Resonance FM, and now compiled in Frank Key’s latest book, Impugned by a Peasant and Other Stories. The tale concludes:

As I nestled down for the night in a border chalet, I inspected my hammer, and was pleased to see that it was almost as good as new. There were a couple of scuff-marks, and quite a lot of blood, but otherwise it looked as if it would serve me well for as long as I continued hammering, all over as many lands as I descended upon, like an angel of death, with my hammer.

The Guardian wrote of Frank Key that he “can probably lay claim to having written more nonsense than any other man living”. Certainly Key is insanely prolific, but his work is only ‘nonsense’ if, say, Mervyn Peake’s Gormenghast, or Pratchett’s Discworld, or even the Molesworth/St Custards stories are also ‘nonsense’. It’s not that Key writes gobbledegook, just that he’s a one-man genre. His world is fully-formed and sits at a 45-degree angle to our own. It has its own geography (a lot of spinneys and marshes and wharves) and a cast of indelible characters – notably the relentless pamphleteer Dobson, misadventurer Blodgett, plucky heroine Tiny Enid and ‘fictional athlete’ Bobnit Tivol – but the whole of our universe is in there too, viewed through the prism of Key-logic.

I Had a Hammer is prime example of one of Key’s inimitable motifs: a phrase, a name or, in this case, song lyric snags his attention and, following that bizarre but strangely irrefutable Key-logic, a chain of events will be extracted from it to lead, by startling twists, to a macabre or frightening or bathetic conclusion.

I hesitate here because analysis of Frank Key is probably futile and, as Beckett said of Waiting for Godot, “it means what it says.” But I would note the following: first, Frank Key has complete command of the English language. It is a very curious thing that despite the apparently rambling nature of his stories, the prose is lean and precise. He doesn’t waste a word and writes the most concise and logical digressions (and digressions within digressions) imaginable, with an effect somewhat akin to that disorienting film technique that Martin Scorsese employs in the diner scene in Goodfellas, where he pans out and focuses in at the same time.

Second, Key is very funny. He is the master of the great opening line. Impugned by a Peasant contains bloody loads of them, such as: “The best thing to do, in certain circumstances, is to lie on your side, upon the grass, in a meadow, and have an acolyte pour vinegar into your ear through a funnel.”  That “in certain circumstances”…now that’s comedy writing; the subtlest clause is the suckerpunch.

Third, Frank Key’s uncompromising determination to plough his own literary furrow is nothing short of heroic. When Gaw and I were planning The Dabbler, our first priority, after choosing a name and some pretty colours, was to enlist Frank Key. The internet is mostly a horrible place, full of porn and Facebook fights and conspiracy theorists. But scattered in the mud are rare gems, such as The Dabbler and Hooting Yard. By buying this book you will be doing an invaluable thing: you will be assisting the gaiety of the universe. You will also have a damn good laugh and a failsafe cure for Great Wakering.

Impugned by a Peasant and Other Stories can be purchased, along with Frank’s other books, here.

7 thoughts on “Review: Impugned by a Peasant by Frank Key”