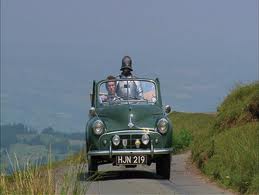 Antiques Roadshow just keeps on trucking, doesn’t it? Personally I find it a source of huge comfort in our ever-changing world. There will always be an England whilst there’s a new series of AR showing on Sunday nights.

It gives a peculiar insight into the middle-of-the-road genius of the English: drenched in civility, conducted with humour but with a very beady eye on what things are worth. You can see how they almost inadvertently ended up with an empire.

The audience has remained very steady over the years, an indication that there’s always a new generation to take an interest (and why wouldn’t they? You need to keep an appraising eye on the inheritance). Fiona Bruce, something of a young person herself, at least in AR terms, has done a seamless job in picking up and refreshing the presenting role. But then they never seem to put a foot wrong here.

There appear to be two main criteria for presenting AR: firstly, you must be well-spoken (I believe I’m right in saying that they’ve only ever employed former news readers with the exception of that unique treasure Arthur Negus); secondly, you must emit a particularly English, low-key, almost diffident, loveliness. All the presenters have had these qualities in spades (I think the latter quality might even be defined as Aspelesque) and Fiona Bruce is no exception.

Anyway, a token of how Antiques Roadshow keeps finding a new audience is the not-so-young-now Adam and Joe celebrating the programme with a ‘rap’:

You’re bored, it’s Sunday, 6.15,
There’s nothing else on the TV
Check it out now, it’s the Antiques Roadshow,
Looking at old stuff, seeing if it’s worth dough

The sun is bright, the crowds polite,
And mostly white, but that’s alright
Check it out now, it’s the Antiques Roadshow
Looking at old stuff, seeing if it’s worth dough…

12 thoughts on “The roadshow winds forever on…”