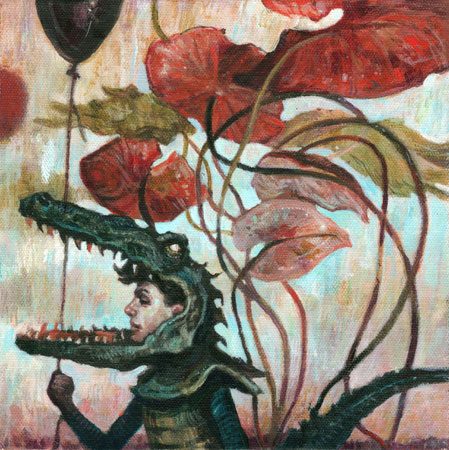 Some months ago I was idling around the more arcane shops of Bristol, searching in what seemed like vain for the perfect birthday gift for a close relation, when I found a print of the above picture and – that rare thing – instantly knew it was right.

It is called Crocodile and was painted by a young locally-based artist called Tim Lane. It is an immensely pleasing picture, and feels like a plate from a non-existent children’s book; one of those wonderful illustrated editions with an ineffable, vaguely unsettling mystery which, once glimpsed in childhood, might haunt the rest of your life. The giant red plants could be from Through the Looking Glass…and why is the party balloon a dispiriting black? I knew the recipient would love the picture and she did. The problem was that I was covetous of my own gift, so a few weeks ago I returned to buy a copy for myself and to find out more about the artist.

The Nails Gallery is located at the bottom of some impractical steps in the landmark St Nicholas Market. This time, upon entering it, I was greeted by a wall of Tim Lane’s work. Clearly the gallery owner – the genial, Stetson-sporting Steve Eades – had decided that Lane should be more prominently displayed. In a way this is a surprising commercial decision, since Lane is one of the very few Bristol artists who doesn’t rely on painting lots of pictures of Bristol. The city’s beauty is underrated nationally but appreciated locally; almost any depiction, stylised or photo-real, of Brunel’s famous Suspension Bridge is a guaranteed seller. Cityscapes involving Park Street and the Harbourside are popular, and since the Bristolian Banksy went global there’s a decent living to be made in recreating his graffiti art.

In an email interview, I ask Lane if he sees himself as part of any kind of Bristol art scene, or indeed, if there is really such a thing as a Bristol art scene. He is straight-to-the-point: “Although I love Bristol and the way it looks, I get no personal pleasure from creating or even seeing yet another hackneyed image of the Suspension Bridge (beautiful and imposing though it is) especially when rendered in the jump-on-the-band-wagon-I’m-the-new-Banksy-street-art-style.” However, he acknowledges that Banksy and his followers have “got the wider world/media thinking of Bristol as more of a cultural/artistic hub… witnessed in the thousands that queued for hours to see the Banksy exhibition at the Museum.” (I’m with him there. I attended the opening day of the record-breaking Banksy show: amusing enough but the best thing about it was accidentally seeing Karl Weschke’s extraordinary Leda and the Swan.)

So Lane doesn’t flog pictures of Bristol – instead, he relies on his imagination, and on buyers liking his pictures for themselves. The question therefore, and one that must apply to thousands of provincial creative types, is whether it is possible to forge a career as an individual artist without first relocating to a London squat.

Tim Lane, 28, was born in Cheltenham and moved to Bristol in 2004, after qualifying with a First Class degree in illustration from the Falmouth College of Arts. Like many of his graduating contemporaries he saw Bristol as an ideal base, offering an exciting social scene compared to “the splendid isolation and natural beauty of Cornwall”, but small and manageable enough for someone who “couldn’t quite yet face London.” Since then, many of his friends have “fallen victim to the Big Smoke” and indeed Tim himself gave London life a go, but “soon ran back to the South West with my tail between my legs.”

In recent years he has exhibited extensively in the region, picking up awards including the competitive Bristol Visual Arts Consortium Award and Bristol Art Show prize, but he also has, and needs, a day job. Yet the cons of being a ‘local’ artist who doesn’t paint the Suspension Bridge are also its pros. After a series of “wholly creatively unsatisfying illustration commissions in the real world” (the problem of ‘following your passion’), Tim paints and draws as the inspiration strikes, “free from the commercial restrictions of art directors and publishers.”

On the subject of his inspiration, I mention the children’s book-plate quality of his work. Are there any particular illustrated books that made a formative impression? As well as Rackham, Tenniel’s Alice pictures and Sendak, Tim cites childhood editions of The Water Babies and 1001 Arabian Nights as haunting influences. Greek mythology is even more important in his work. Crocodile is part of a series of small but striking paintings in which mysterious partygoers attend a modern version of a Dionysian feast or Bacchanalia, dressed in symbolic animal costumes.

Tim claims to be “fascinated by ancient civilizations (Aztecs, Maya Egyptians, Native Americans) and their amazing death rites and theologies and mythologies.” Bizarre funeral rituals feature in a number of his works, such as The Burden. Death as a subject provides endless creative possibilities “because it is something that we will never be able to fully understand… alternative afterlives, beliefs, explanations.” 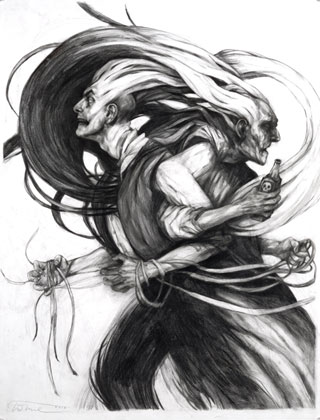 Morbid concerns are prominent in the Gothic graphic elements of Tim’s work too, recent examples of which include huge, gobsmacking drawings of Jekyll and Hyde (above), and Scrooge facing the Ghost of Christmas Future (below). This is an area where he does at least feel Bristol exerts a direct influence, with its ‘darkly atmospheric’ music scene, the “Victoriana, Taxidermy, Puppetry, Burlesque-y, Vaudevillian, David Lynchy, ‘Carnyville’ performance stuff.” I think I know what he means. I suggest that he should illustrate some Tom Waits records – Cemetery Polka from Rain Dogs is crying out for the Tim Lane treatment. He promises to “get on it”.

If he produces the Waits painting I’ll probably buy it. But once again we’re left with the practical problem of being a Bristol artist who doesn’t paint Brunel’s bloody Bridge. “I would like to make a living from art, but that has to happen when it is ready to happen,” says Tim, candidly. “I can’t keep having vain hope of fame, as it is too exhausting emotionally. So it is nice to sell prints to people who value them and the odd original and let it grow naturally…”

This is an admirably Dabblerish sentiment. Within the field of illustrative art, Tim Lane’s work is original and striking. It deserves a wider audience and, I think, even though he paints for himself it has an appeal that might be just popular enough to propel him if not to Banksy levels of fame, then at least to a decent living. Certainly the Stetson-sporting Steve Eades believes so. “He’s on the verge of going to the next level,” he tells me, and I don’t think it’s entirely sales patter. “If I could, I would have a whole gallery just for Tim Lane.”

You can view more of Tim’s work on his website: www.timlane.co.uk. Prints and some originals are available at the Nails Gallery, Bristol.