My old school celebrated a special anniversary recently, which I dutifully attended. Stepping back to my days as a rather plump school librarian, I fondly recalled the privilege of precious moments spent huddled up in a cosy, heated corner ‘reading’ French and German fashion magazines. Said corner has since acquired comfy-cushioned chairs and a selection of rather less than inviting travel guides. 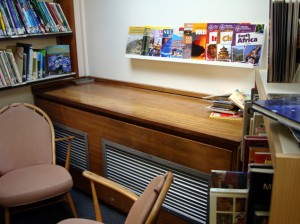 Back in the day when the library was loaded full of literary and reference works for study, there was usually a good selection of mildly popular stuff too. One of the more inspiring books was Puffin’s Pleasure, which somehow managed to transform mundane activity into alluring pastime. Take walking:

“The cheapest, most challenging and rewarding form of exercise”, according to Jane Nissen, who predicted that “We may be on the edge of a walking revolution…Many city centres are banning cars and walkers are recapturing the streets. City walking is fascinating just because of the details and differences of the streets. Try a zigzag walk.”

Each child reading this miscellany of well thought out, invigorating material was encouraged to “be an adventurer, to travel light and be self-sufficient, to enter a world of freedom, excitement and discovery… by walking.” What’s more, walkers were presented as heroes in the form of men in space and on the moon, great explorers, soldiers in Roman legions, Olympic walkers, wandering poets and so on. Added to which, in 1976, the layered look of two pairs of socks was, apparently, ‘high fashion’ for walkers. 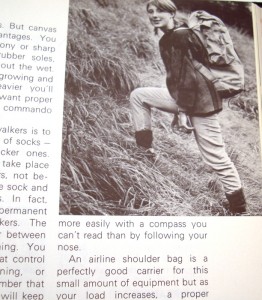 And there was plenty of even more fascinating stuff: “In 1972 after a plane crash 13 year old Juliana Koepcke staggered for ten and a half days through the impenetrable Peruvian jungle. She had a broken collar bone and a bad foot and she was only wearing sandals. Luckily she knew about the hazards of the jungle – poisonous snakes, tree spiders and fire ants.”

Fast forward a few decades and almost 30 percent of British children are overweight or obese – and around 40 percent of boys and 60 percent of girls come nowhere near the hour-a-day exercise levels recommended by doctors. In the summer of 2009, there was even a government funded pilot scheme in Barrow-in-Furness to get more children walking – only deemed possible by the lure of themes, masks, games and treasure hunts. The Ramblers, also involved in the scheme, felt it necessary to list their ‘top tips for getting kids walking.’ No mention of Peruvian jungle reenactments though.

A couple of years ago the British Medical Journal reported “a culture of car use, fed by a fear and dislike of local environments and parental responses that emphasised children’s safety at the expense of developing their independence, despite children expressing responsible attitudes towards transport choices.”  But, whilst cycling on roads may present real dangers (yet to be acknowledged by Mayor Boris), walking is seen as much less fun. It’s interesting to note that recently published Michelin I-Spy books include I Spy on a Car Journey, I Spy Cars, I Spy On the Motorway, I Spy Car Badges and I Spy At the Airport.

On the flip side, an overreaction to lack of exercise has resulted in a spate of children’s gym openings in more upmarket neighbourhoods. There’s even an 8 week ‘running school’ programme, to assuage anxious mothers, who fret that their child “may lean forward when running, putting too much stress on the back. Or might strike too hard with the heels, juddering their frame. They may fail to use their arms properly, causing the body to twist.” Learning to run properly is “a discipline that will go on into life.”

Of course, kids can always take the Wii Fit walking test to see how putting one foot in front of the other should be correctly done..

.. before progressing on to the ‘beginners’ tightrope walk’.

Or they can sit down and read the X Factor Annual – probably the most curious new addition to my former school’s library. But, far from being a backwards step, will this actually will do any harm?  If there’s one thing to be learned from celebrities it’s how to stand upright, walk tall, get plenty of exercise –  perhaps even take up The Alexander Technique… and, of course, to walk with style – be it on the catwalk, the stage, or heaven forbid, in order to make a grand entrance at a book signing. 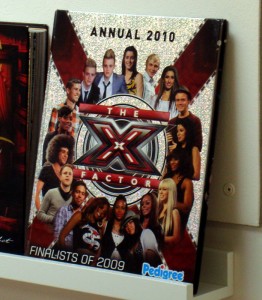 7 thoughts on “RetroProgressive – A step back in style?”