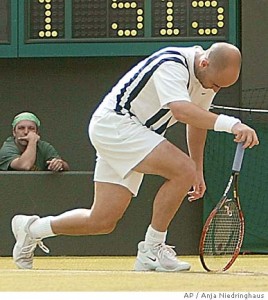 “I play tennis for a living even though I hate tennis, hate it with a dark and secret passion and always have”, wrote Andre Agassi in his autobiography Open.

It seems that many top sportsmen hate the only thing they’re good at. Stan Collymore used to say he didn’t like playing football and Chris Eubank always professed to loathe boxing.

“Sometimes as a cricketer you just long for it to rain,” says former England all-rounder Vic Marks. “I’m not saying cricketers hate cricket, but when you’re playing a county game and the sky darkens and it starts to piss down, it doesn’t half fill everybody in the dressing room with joie de vivre… When it pissed it down, you knew were not going to fail that day.”

Fear of failure can turn players into emotional cripples, a particular problem for those at the peak of their profession and burdened by the expectation of success. But what about the ennui of winning?

Take Ronnie O’Sullivan, probably the most gifted snooker player ever. Many actively dislike the man, but it seems a failure of empathy to damn O’Sullivan’s various brainstorms and mood-swings and lashings-out. His flicking of the bird at the missed red ball in the video below is both absurdly funny and rather sad. He is a man in a very strange situation: he hates snooker. He is visibly bored and irritated by the prospect of having to poke all those frigging balls into the poxy little pockets over and over again. But he can’t do anything else and all of his peers envy his outrageous talent. And always the mediocrities, the keen tryers, the sad-acts who go on to make a living talking about this most trivial of pastimes, are endlessly nagging, nagging at him to knuckle down and be a ‘professional’. But professionals are in many ways the bane of sport, the stodge. O’Sullivan is the snookerist you’d pay to watch.

That’s why, as well as being the most disliked player, he’s also the most popular.

11 thoughts on “Row Z – The sports stars who hate sport”