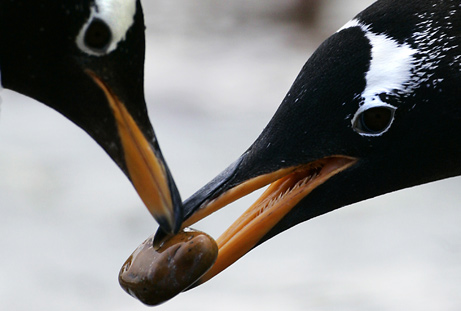 The world’s oldest profession might be even older than we previously thought, according to this strange Wikipedia article unearthed by the Wikiworm…

A few studies have been used to promote the idea that prostitution exists within certain animal groups.

Prostitution in animals was first reported in 1998 by Fiona Hunter, a researcher at the University of Cambridge, and Lloyd Davis of the University of Otago, who had spent five years observing the mating behavior of penguins near Antarctica.

According to the report about the study published by BBC News Online, some female penguins sneak around on their partners. These birds have sex with unattached males and take a pebble from the male’s nest after having sex. Or they sometimes perform the courtship ritual as a trick and grab a stone without the sex (in the actual study the researchers speculate that the female has bent over to grab a stone and the male has misinterpreted the gesture–she hasn’t changed her mind or performed a trick).

While the sensationalized versions of the study emphasize prostitution, the research data itself is less sensational. The data shows that when extrapair copulation occurs at the male’s nesting site, the female takes one or more stones; but when the extrapair copulation occurs at the female’s nesting site, the male never takes a stone. Clearly a male who has copulated with a female benefits his progeny when she takes a stone. Sometimes copulation doesn’t occur, but the female still takes a stone. But both males and females steal stones: sometimes they get away with it and sometimes they are attacked. The benefit of gaining stones without a fight is clear, but the female is not always willing to copulate to avoid a fight. The researchers speculate about the possible genetic fitness advantages and disadvantages of the practice, and aren’t altogether sure that the female copulates mainly in order to obtain a stone.

A study conducted by the Max Planck Institute for Evolutionary Anthropology in Leipzig, Germany, and published online in the Public Library of Science, attempted to support the meat-for-sex behaviour hypothesis, according to which, in early human societies the best male hunters had the maximum number of sexual partners. Unable to study early humans, researchers studied chimpanzees. Researchers observed chimpanzees in the Taï National Park and concluded that a form of prostitution exists among the chimpanzees in which females offer sex to males in exchange for meat. According to Cristina Gomes of the Institute, the study “strongly suggests that wild chimpanzees exchange meat for sex, and do so on a long-term basis”. The data reveals that chimps enter into communities of hunting and sharing meat with each other over long periods of time and females within the meat-sharing community tend to copulate with males of their own meat-sharing community. Direct exchange of meat for sex has not been observed.

In a 2005 study at Yale–New Haven Hospital, capuchin monkeys were taught to use silver discs as money. One researcher “saw something out of the corner of his eye” that looked like a coin being exchanged for sex. The researcher took steps to prevent any possibility of the coins being used for sex after his suspicions were aroused, so while it is possible that it happened once, no events of this nature were ever repeated.