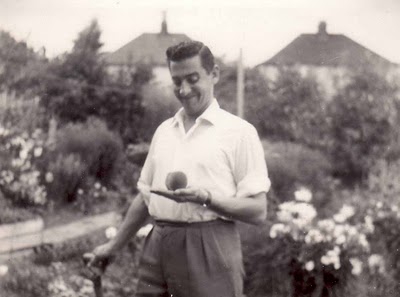 A few years ago bookseller Steerforth came across a remarkable diary, which he began to publish on his blog and which we now serialise on The Dabbler. If you’re new to Derek, you can catch up with the previous instalments here. This week, the winter and Christmas of 1984…

Today’s extracts come from December 1984, when a major concern in Derek’s life was the belligerent presence in his home of his mother-in-law ‘Nanna’.

Sadly, Nanna does not appear to have succumbed to the Christmas spirit:

A curious Saturday, with Nanna doing her incredibly lifelike impersonation of the devil in full spate. She accused Brenda and myself of being cunning; and accused Brenda of being corrupted by the evil of my family. And all because we did her the favour of clearing furniture out of her flat, so that a new tenant could move in next Monday. My thoughts are fearful concerning her and what she does to my wife.

I lay in bed awhile this morning and talked with Brenda, mentioning my concern that we seemed to have reached a plateau in our relationship with no discernible spiritual progress. She agreed with this and then mentioned that part of the problem was that she never really felt well, plus her waning energy, and more importantly, her mother’s malign daily effect on her. Though we could think of few remedies, it was good to get some thoughts out into the open that we might at least draw closer by reason of speaking of hidden and frustrating things.

It is little wonder that Derek and Brenda’s relationship has lost its sparkle, when most of their spare time is taken up with looking after a mentally handicapped son and an elderly mother. Derek maintains his sanity by keeping his diary and cherishes the moments when he can sit in his “library” and gather his thoughts:

I am in my room, listening to popped-up classics, and tapping away at these so-familiar keys. I must have written many millions of words over the years. How many of them will remain? Few, I opine. And how much of a writing style do I really have? Does my personality shine through the sentences, or do they only convey dryness and boredom, that which is learned through the roteness of pedantic learning and is made up of cliche and circumlocution?

I try to be as precise and simple as I can in what I write, but rarely compose my thoughts into a pattern of rich density that will convey in interesting fullness that which I wish to convey. My fingers fly off too quickly as is evidenced by the large number of words in this journal that suffer a transposition of letters. But which is of more importance–the message or the medium?

Many of Derek’s diary entries faithfully record the minutiae of his daily life:

Last night when I arrived home, I found things rather chaotic. Brenda was busy boiling the Christmas puddings, trying to make a cornbeef hash, and coping with several acres of washing. During the day, she met with men from the mini-auction rooms who strongly rejected Nana’s refrigerator and gas stove; and she took delivery of our replacement bed from Owen Owen, the other that we had having sprung a spring and caused a nasty scratch on Brenda’s leg.

Later we visted Alan and Dora Burchett. They were sitting quietly at home, peace palpatating from the walls.

Occasionally, there is also a little excitement:

When I got home last night, I found Brenda surrounded by mounds of drying washing, the dinner uncooked, and her mother sitting in the front room, her first venture down in quite a while. Brenda was not too happy. Her day had gone somewhat awry.

Nanna’s venture down was to the purpose of making out a list of the things she wanted from the shops, and she expected Brenda to do the traipsing about that day. So Brenda ventured forth and arrived at Tesco’s and lo! as she arrived, an Arab man, accompanied by a young woman, came out of the entrance. The Arab was immediately followed by another man who seized him with the words, “I am making a citizen’s arrest; you stole an old lady’s bag of shopping.”

The Arab tried to shake him off, telling him not to be so stupid, the bag of shopping was his, he saw it just standing there. At this point, ladies came pouring out of the shop, shouting and gesticulating, all intent on grabbing the Arab. As usual on such occasions not a policeman was to be seen. The Arab shook off the erstwhile citizen and made off with the bag of shopping. At this point Brenda got stubborn, being unwilling that the man should get away just like that, so she followed the Arab along the High Street until she found a woman policeman, who promptly called for reinforcements.

The magic of Derek’s diaries is that after writing a mundane entry about his vegetables, or Brenda’s headaches, he will suddenly come out with an extraordinary paragraph like this:

I have a most powerful testimony of pre-existence. I know that I lived with Heavenly Parents, before I came here, in celestial mansions. They gave life and progress to that existence our Father organized, an intelligence that has always existed, but which was locked in the silence and vastness of dark space without the possibility of progress until His love and law gave me spiritual life. I do not know my spiritual age. I believe it to be several thousands of years and that I stood in His presence in the Grand Council of Kolob when the Plan of Salvation was presented to us.

Upon this murky, forsaken morning I became 52 years of age and hardly look a day over twenty-five! But I suppose a mirror can lie, so too much credence ought not to be placed upon what I see reflected in my mirror each morning!

5 thoughts on “The Diaries of Derek – 6. Derek in Winter”