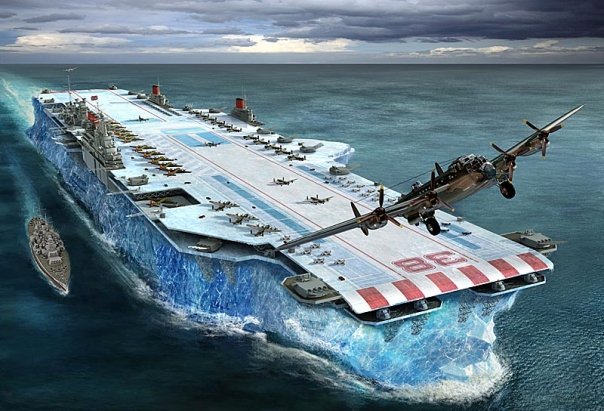 Project Habakkuk was a plan by the British in World War II to construct an aircraft carrier out of pykrete (a mixture of wood pulp and ice), for use against German U-boats in the mid-Atlantic, which were beyond the flight range of land-based planes at that time.

The idea came from Geoffrey Pyke who worked for Combined Operations Headquarters. Pyke, (regarded as a genius by his boss, Lord Mountbatten) had been considering the problem of how to protect seaborne landings and Atlantic convoys out of reach of aircraft cover. He proposed that an iceberg, natural or artificial, be levelled to provide a runway and hollowed out to shelter aircraft.

Pyke was not the first to suggest a floating mid-ocean stopping point for aircraft, nor even the first to suggest that such a floating island could be made of ice. The idea was a recurring one: in 1940 an idea for an ice island was circulated round The Admiralty but was treated as a joke by officers, including Nevil Shute, who circulated a memorandum that gathered ever more caustic comments.

In early 1942 experts were called in to determine whether an ice floe large enough to withstand Atlantic conditions could be created fast enough. It was pointed out that natural icebergs have too small a surface above water for an airstrip, and are prone to suddenly rolling over. The project would have been abandoned, except for the ‘invention’ of pykrete, a mixture of water and woodpulp which frozen together was stronger than plain ice, was slower melting, and of course would not sink.

Pykrete could be machined like wood and cast into shapes like metal, and when immersed in water formed an insulating shell of wet wood pulp on its surface which protected its interior from further melting. However, there was a problem: ice slowly flows, in what is known as plastic flow, and tests showed that a pykrete ship would slowly sag unless it was cooled to −16 °C (3 °F). To accomplish this, the ship’s surface would have to be protected by insulation and it would need a refrigeration plant and a complicated system of ducts.

Experiments on the viability of pykrete were conducted in a secret location underneath Smithfield Meat Market in the City of London. The research took place in a refrigerated meat locker behind a protective screen of frozen animal carcasses. (This meat locker is now site of seminal London nightclub, Fabric.)

The requirements for the vessel became more demanding: it had to have a range of 7,000 miles (11,000 km) and be able to withstand the largest waves recorded, while the Admiralty wanted it to be torpedo-proof, which meant that the hull had to be at least 40 ft (12 m) thick. The Fleet Air Arm decided that heavy bombers should be able to take off from it, which meant that the deck had to be 2,000 ft (610 m) long. Steering also raised problems; it was initially projected that the ship be steered by varying the speed of the motors on either side, but the Royal Navy decided that a rudder was essential. However, the problem of mounting and controlling a rudder over 100 ft (30 m) high was never solved. 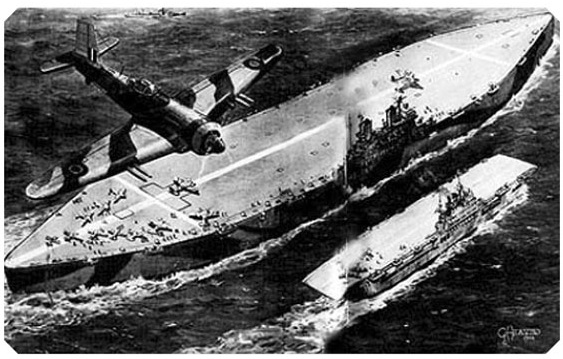 According to some accounts, at the Quebec Conference of 1943 Lord Mountbatten brought a block of pykrete along to demonstrate its potential to the bevy of admirals and generals who had come along with Winston Churchill and Franklin D. Roosevelt. Mountbatten entered the project meeting with two blocks and placed them on the ground. One was a normal ice block and the other was pykrete. He then drew his service pistol and shot at the first block. It shattered and splintered. Next, he fired at the pykrete to give an idea of the resistance of that kind of ice to projectiles. The bullet ricocheted off the block, grazing the trouser leg of Admiral Ernest King and ended up in the wall.

In addition, Mountbatten himself had withdrawn from the project. The use of ice had actually been falling out of favour before that, with other ideas for “floating islands” being considered, such as welding Liberty Ships or landing craft together (Project TENTACLE).

The Habakkuk design received criticism, notably from Sir Charles Goodeve, Assistant Controller of Research and Development for the Admiralty during World War II. In an article published after the war Goodeve pointed out the large amount of wood pulp that would be required, enough to affect paper production significantly. He also claimed that each ship would require 40,000 tons of cork insulation, thousands of miles of steel tubing for brine circulation, and four power stations, but that for all those resources (some of which could be used to manufacture conventional ships of more effective fighting power) Habakkuk would only be capable of six knots of speed. Much of his article also contained extensive derisive comments about the properties of ice as used for ship construction.