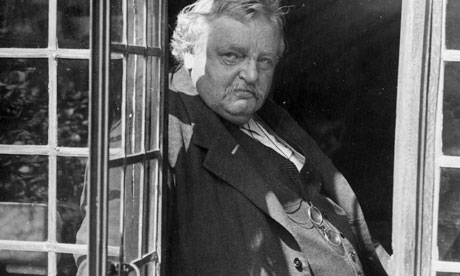 I don’t know why I had never got round to reading G.K. Chesterton’s The Man Who Was Thursday – or, come to that, The Napoleon of Notting Hill.  I’ve now repaired the first omission – and great fun it has been.

Subtitled ‘A Nightmare’ and generally classed as a ‘metaphysical thriller’, The Man Who Was Thursday (available for 1p from Amazon here) seems at first to be an unusually high-spirited, but recognisable, Edwardian adventure story about a chap becoming a detective and infiltrating a dangerous circle of anarchists. But the chap is more poet than policeman, and it isn’t long before things get rather too strange for any kind of conventional thriller.

From the very beginning – in the suburb of Saffron Park, ‘on the sunset side of London, as red and ragged as a cloud of sunset’ – the lighting effects are superbly lurid and dramatic, not quite of this world, indeed more like ‘A Nightmare’. But it’s a very jolly kind of nightmare, full of comic moments and sharp wit, and building up to an all-action climax (or pre-climax) built around an epic chase (Chesterton has a Kiplingesque relish for vigorous, even violent action – as well as, of course, food and drink).

It’s hard to say much about the story without spoiling the fun for those who have not yet read it, or irking those who have. It is a book full of wise and wonderful observations and paradoxes, firmly on the side of Life, the real life of real humans, and savagely against inhuman – and godless – Ideas. And it is often very funny. Here’s a passage that brilliantly ridicules what is wrong with a certain way of thinking – a way of thinking still all too prevalent among today’s terrorists. An anarchist has got up to address the meeting:

‘Comrades,’ he began, as sharp as a pistol-shot, ‘our meeting tonight is important, though it need not be long. This branch has always had the honour of electing Thursdays for the Central European Council. We have elected many and splendid Thursdays. We all lament the sad decease of the heroic worker who occupied the post until last week. As you know, his services to the cause were considerable. He organised the great dynamite coup of Brighton, which, under happier circumstances, ought to have killed everybody on the pier.  As you also know, his death was as self-denying as his life, for he died through his faith in a hygienic mixture of chalk and water as a substitute for milk, which beverage he regarded as barbaric, and as involving cruelty to the cow. Cruelty, or anything approaching to cruelty, revolted him always…’

GKC himself described The Man Who Was Thursday as ‘a very melodramatic sort of moonshine’, adding that it was ‘intended to describe the world of wild doubt and despair which the pessimists were generally describing at that date; with just a gleam of hope in some double meaning of the doubt, which even the pessimists felt in some fitful fashion’.

No doubt both are true – but it is also the most tremendous fun.

2 thoughts on “1p Book Review: The Man Who Was Thursday by G.K. Chesterton”