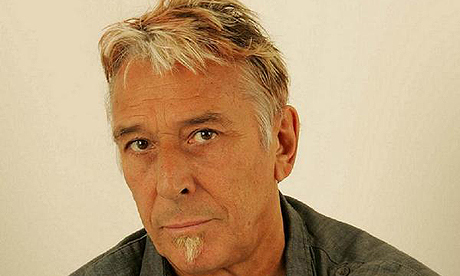 John Cale is 70. But this does not make him a joke. He never seemed young, nor was his art inspired by adolescent desire or angst, unlike most rockers. Even in the Velvet Underground, there was something stern, disciplined and austere about him. This is a man who fled the Welsh valleys on a classical music scholarship to the US and who cut his teeth on the NYC avant-garde scene in the early 60s, where he specialized in playing drones that would last for hours. Recordings of that early stuff exist, but for fun I begin this extended tribute with something else: Cale’s 1963 appearance on the game show “I’ve Got a Secret” as an ultra -dry, poker-faced 21 year old with a Presbyterian sense of style, a certain mysteriousness and- as the host says- “a will of iron.”

Two years later and Cale had formed the Velvet Underground, meshing his avant-garde sensibilities with Lou Reed’s songwriting skills. Andy Warhol added them to his menagerie, designed and “produced” the first album and the rest is rock n’roll history. Cale’s love of the slow drone shows up on the S & M themed Venus in Furs, as his viola grates away beneath Reed’s shocking-for-1967 lyrics:

The relationship between Cale and Reed was volatile and after two records Cale would be ejected from the VU line-up, making it clear who was responsible for every single aspect of the band’s musical experimentalism (hint: it wasn’t Lou Reed). He did some producing, worked as an A & R man and knocked out a couple of exploratory LPs before hitting his artistic stride with Paris 1919 in 1973. This is one of the great records of the decade, and the LP where Cale is at his strongest as a composer and arranger. It is lush, orchestral, melancholy, melodic, elegant and decidedly European- even though most of the musicians were members of the southern rock boogie band Little Feat. Cale often weaves evocative travelogues into his lyrics, and one of his finest is the epic Endless Plains of Fortune, where at the 1:29 mark he puts together this striking sequence: “Then Martha went/Yes Martha went away again/Down in Transvaal/Where crocodiles and men/Fight on”. It’s the way he tells them:

Paris 1919 was followed by a trilogy recorded on the Island label, which saw him collaborate with Brian Eno among others. During this period his live show became increasingly aggressive, until one day he slaughtered a chicken mid-performance causing his band to walk off stage in disgust. The eponymous title track on the first album in the trilogy, Fear, is one of his finest. It juxtaposes elegant piano with demented freak outs and the occasional classical interlude. You can’t do this kind of thing without musical chops, which is why it always irritates me when rock musicians fetishize their limitations. Here’s a wonderful clip of a beefy, 40-something Cale performing the song solo for a crowd of Germans, which is followed immediately by a full band version. Too much Bolivian marching powder? Maybe: he did snort a mountain or two of the stuff in the 70s and 80s. But even if that’s the case it doesn’t diminish the power of his playing and singing- he is an impassioned, bold performer, unafraid of chaos or control, always pushing his voice to the limits of its expressiveness:

The 80s were a fairly fallow period for Cale creatively, although Music for New Society has its defenders. I haven’t heard it in years, so I can’t comment. Even he admits the drugs were taking their toll. Fatherhood sobered him up however and by 1989 he had reverted to his austere Presbyterian look, releasing the Eno-produced Words for the Dying, a fully orchestral song cycle based on poems by Dylan Thomas. In 1990 he released Wrong Way Up, a full collaboration with Brian Eno, and I vaguely recall from Cale’s autobiography that the pair were pretty much ready to kill one another by the time they were done recording it. This is probably the “poppiest” album recorded by either man, and features some great songs, one of which is this marvellous little gem, the ominous lyrics of which were pulled by Eno from a Spanish phrasebook:

1990 was an extremely productive year for Cale as he released a second collaboration, Songs for Drella, where he reunited with Lou Reed to pay tribute to the VU’s impresario, Andy Warhol. It was a good time to get back together as Reed’s own creativity was at a peak following 1989’s highly successful New York. Don’t be deceived by the smiles however, for soon they were at each other’s throats again and Cale subsequently disowned the statement on the back of the LP giving Reed the credit for doing all the hard work as an unfortunate but necessary diplomatic concession to his collaborator’s rampant egomania. This track is obviously a Cale composition, and a fine one at that:

In 1993 Cale and Reed managed once again to put aside their animosity and reform the Velvet Underground, but the band imploded after completing a European tour. Cale released one underwhelming solo album in 1996 but otherwise disappeared into soundtrack work for most of the decade. An encounter with the music of Beck reinvigorated his interest in songwriting however and in 2003 he reemerged on EMI with “Hobo Sapiens”, an album of loops, beats, avant-garde sounds, evocative lyrics and fresh energy. Letter from Abroad is an impossible to categorize song about alien places, a sinister counterpart to his earlier, tragic- romantic travelogues. “It’s a squalid little town/With a tenuous beauty” Cale declares before later informing us: “They’re cutting their heads off/In the soccer field/Stretching their necks/In the goal/Taking them out/In the elephant grass/Feeding them/To the hyenas.” The lyrics are as good as any he’s written; the music strange and unnerving. Note the pink rinse, signalling the total abandonment of his austere Presbyterianism style:

Cale will release a new record on Domino later this year: he remains creative, impassioned, stubborn, willful, profoundly musical- and he has aged a lot better than Lou Reed. However I’d like to draw this 70th birthday tribute to a close with a Cale rendition of someone else’s song. Forget Jeff Buckley: the finest cover of Leonard Cohen’s Hallelujah is John Cale’s, most easily found on the exceptionally good live album Fragments of a Rainy Season. At once understated, elegant, powerful, melancholic and beautiful it is as close to perfection as you can get in a pop song: