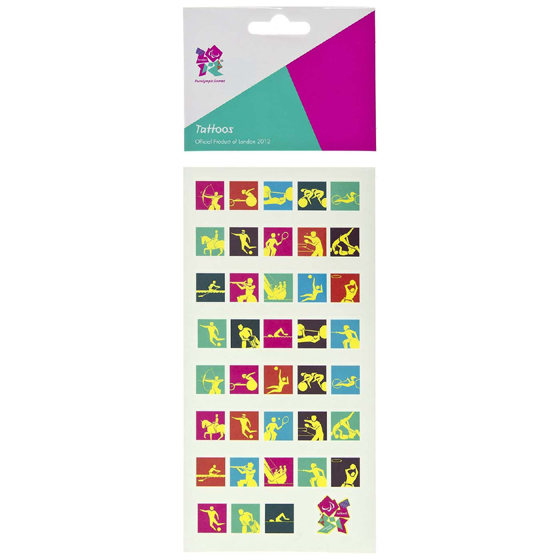 This time next year it will already be over. So how will we keep our memories of the 2012 Olympics alive? By shopping for souvenirs, of course. On visiting the Museum of 1951 at the Royal Festival Hall recently, I was struck by the high quality handiwork and timeless design of memorabilia from the Festival of Britain. I thought it might be fun to compare some of the retro ’50s pieces with items of official merchandise, devised at great expense, for the London Olympics:

In terms of branding, you’d think that 60 years of progress in corporate logo creation would equate to a significant improvement in design. But sh**e is a word that accurately describes the 2012 effort.

And, whilst the word ‘iconic’ often grates, it seems curiously appropriate when used in conjunction with that abiding symbol of the Festival of Britain, the Skylon tower. Hardly so for the official mascot of Great Britain’s Olympic team, Pride the Lion – shown here in a ‘cuddly three pack,’ priced at a scary £45. 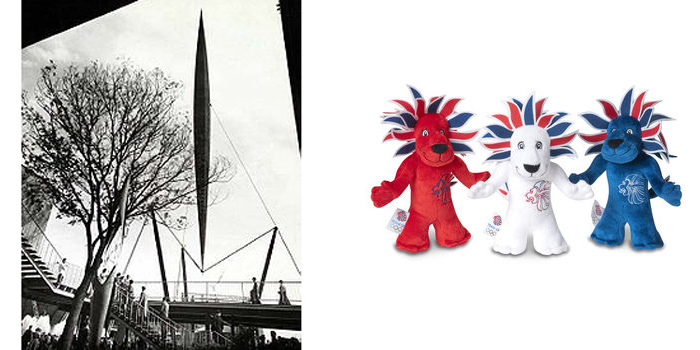 Scarier still are the other mascots:  weirdly one-eyed Wenlock (below right), named after a place in Shropshire – and the Paralympic monster mascot, Mandeville (left)– named after Stoke Mandeville Hospital, where the first Paralympic Games took place. Large sized soft toy versions are available, retailing for up to £170. 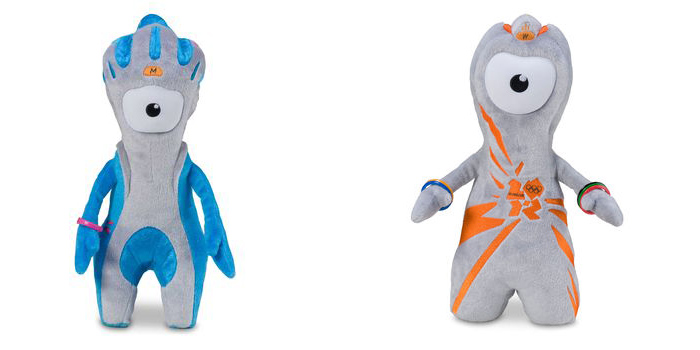 If that’s a bit too pricey, why not tempt the kids with Paralympic temporary tattoos at only £3 a set – as shown above (top), ‘children love these fun temporary tattoos that are an ideal party bag filler.’  I don’t suppose they had party bags in 1951? The children’s games and novelties available at the Festival of Britain were much simpler, more modest – and certainly a lot more educational… 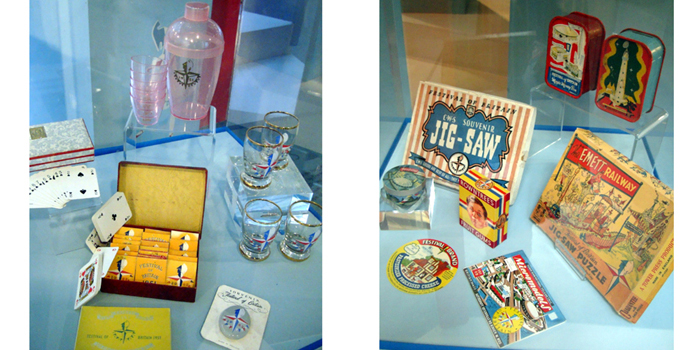 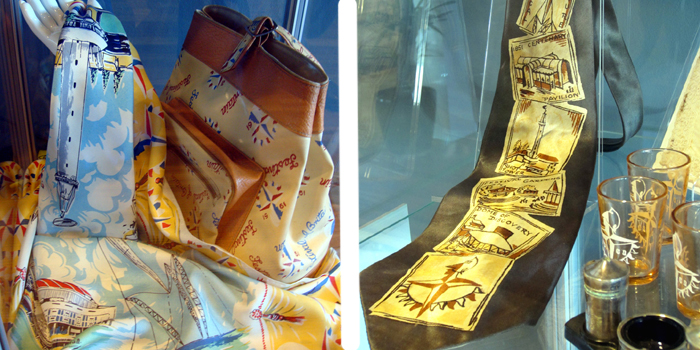 Today’s lady looters shoppers will no doubt covet this ‘sporty shorts* charm’ (*the sort Katie Price wears) to celebrate the London Olympics. For men, there’s the £123 unisex Stones Hoody by Stella McCartney, which is ‘adorned with hot-fix studs, symbolising the medals captured by the British at the Olympic Games in Beijing.’ 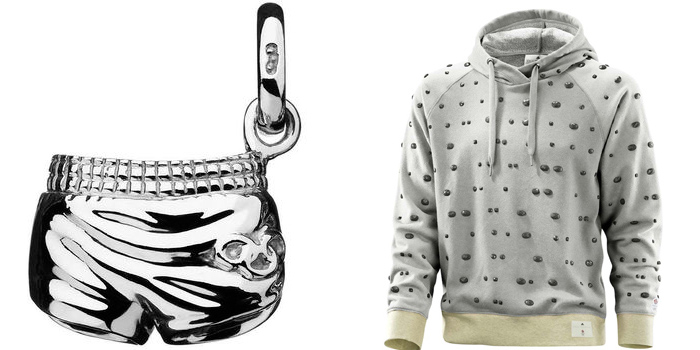 Others will wish to purchase special mementoes to treasure for years to come, or presents to take home for loved ones. The enamelled powder compacts and delicately embroidered silk handkerchiefs for ‘mother’ and ‘wife’, from the Festival of Britain, are as collectable today as they were in the 1950s. 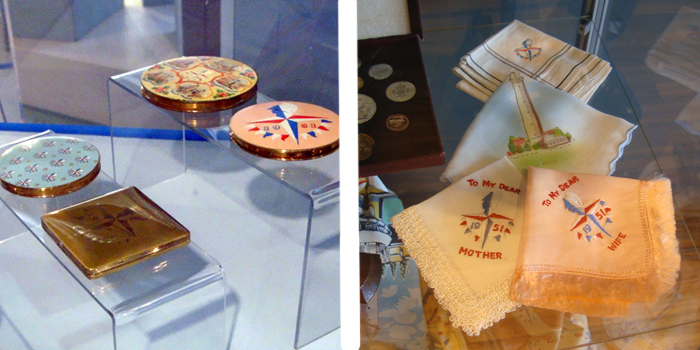 As for the Olympics next year, the fact the event starts in July and runs into August will surely serve to remind us that we’re already well into the Christmas shopping season? However, should you wish to buy your Christmas 2012 gifts a year and a half in advance, the official merchandise is already available for online purchase in August 2011. So, how about a ‘highly collectable hand decorated glass figurine’ of Wenlock in its own ‘wooden keepsake box.’ Or Mandeville’s Union Jack mascot snowstorm? 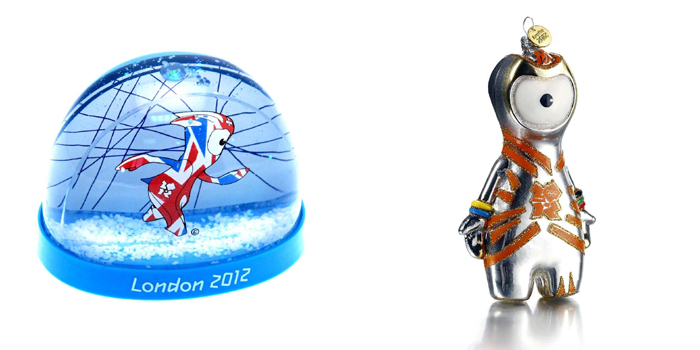 Finally, for a truly lasting memory of the riots games, why not buy ‘your very own special limited edition Wenlock policeman’ – or perhaps you’d prefer printed pin badges of Wenlock PC and Mandeville WPC (sic).  No? 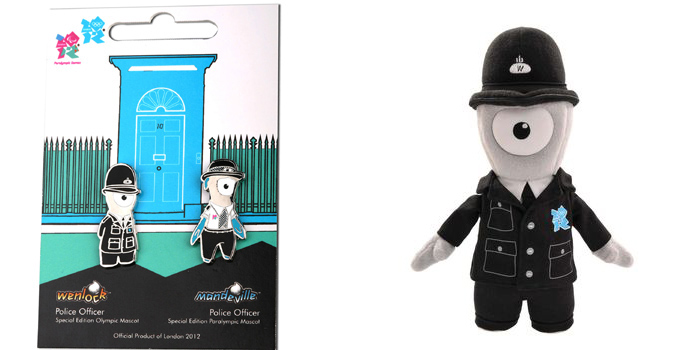