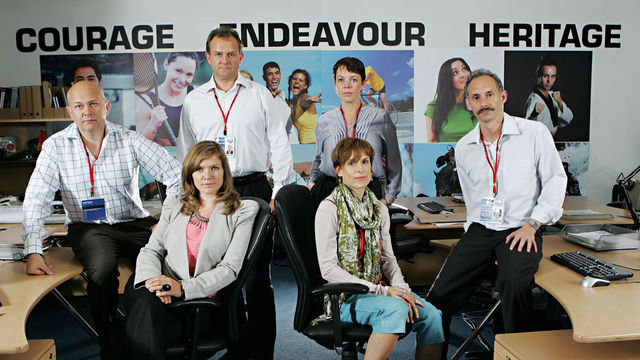 On Monday four British athletes (sailors and rowers – we still rule the little waves) convened in Trafalgar Square to unveil a giant digital clock designed to count down 500 days to the start of the 2012 Olympic Games. Yesterday, at 500 days, 7 hours and just under 6 minutes, it stopped.

The comic timing really couldn’t have been better for new series Twenty Twelve (BBC Four Monday 10pm) since the mock-documentary format relies on being an amusing but not wholly implausible exaggeration of the truth, and the central theme of the opening episode concerned the unveiling of a giant clock designed to count down 1000 days to the start of the 2012 Olympic Games. Brilliantly, the failure of this ‘backwards’ clock wasn’t technical but conceptual: “Does it count backwards in time or numbers?” demands harassed Head of Olympic Deliverance Hugh Bonneville. “Ok, so here’s the thing about the clock, right, um the thing with the clock is, Yeah? ….” gabbles Head of Brands Jessica Hynes.

Hynes’ horribly believable PR numpty, whose sense has been entirely crowded out by business jargon and misguided assertiveness, is the best thing in the programme. But the quality of the comedy in Twenty Twelve is less notable than the fact that it has been made at all.

Great Britain, it is now clear, has become utterly incapable of taking itself seriously. Only here, surely, could the preparation for the forthcoming Olympics produce a comedy series that doesn’t so much satirise bumbling organisation and well-meaning incompetence as celebrate it. Only here could the real-life Chairman of the Organising Committee be persuaded to join in the fun (Seb Coe makes a cameo next week). “The Trafalgar Square clock has stopped? Hee hee – good old us!” is the general sentiment in the Land of Boris. Is this commendable or depressing? Are we just bored of ourselves?

I don’t know, and I’m not even sure how good Twenty Twelve is as a comedy. With every passing mock-doc the towering greatness of The Office becomes clearer: first because it balanced the monster Brent and the absurd clown Gareth with the pathetic but sympathetic everyman Tim; and second because, critically, Brent was aware of the cameras and played to them. This produced an extraordinary tension in almost every scene and injected each laugh with a needle of pain. On the evidence of the first episode Twenty Twelve lacks a monster, has too many clowns, and the everyman – Hugh Bonneville’s Ian Fletcher – is in the position of authority, leaving him stuck in a default comedy setting (though a very well-played one) of flustered exasperation and reducing the stakes for the hapless planning team.

Though rarely hitting LOL heights there were some fine gags. I liked the attempts to find a post-Games buyer for the Tae Kwon Do Arena. The fantastically rude northern artist responsible for the Backwards Clock was well done. But the best bit of writing came right at the end, with Bonneville cornered into explaining, live and unrehearsed to the media, why the clock starts on 27 July 2012 and will then count gradually back to today’s date in time for the Opening Ceremony. His spiel is Mozartian in its improvisational genius:

“For now, as we stand here today, the clock points us towards our destination. When we arrive it will be reminding us of this day, and of the journey we’ve just taken.”