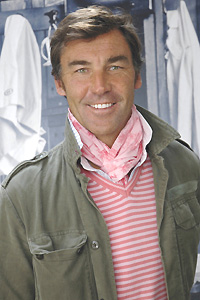 One morning, earlier this year, I spent a good few minutes standing in front of a large billboard close to Putney Bridge, trying to fathom out why models wearing curiously Continental, colour coordinated and perfectly clean clothing were made up to look as though they’d been in a punch-up. When I heard that French fashion firm, Eden Park, was kitting out the English rugby team, the story began to unravel.

Eden Park’s co-founder and chief executive is former French fly-half, Franck Mesnel, who together with four of his French team mates called themselves ‘Le Showbizz’. To celebrate reaching the finals of the Rugby World Cup in 1987, they wore pink bow ties during the match. This symbol was later adopted as the logo of Mesnel’s new fashion label – which is, of course, named after the famous Eden Park rugby stadium in… New Zealand.

Eden Park now has an annual turnover of over E50 million, with Mesnel overseeing the design and manufacture of garments from start to finish. As a trained architect, he’s used to design work, and claims that “detail is fundamental…We use all the processes and all the methods, and then at the end we just add a touch of fantasy.”

In this video the English team members enthuse about the detail in their new garments, including: Roses embroidered on their shoes in the style of rather gauche gentlemen’s slippers; pockets stuffed with handkerchiefs that foppishly spill over to reveal lively floral prints (more roses); cute little touches of embroidery inside the jackets – and bizarre looking bakers’ caps that were clearly inspired by Mark Lester in Oliver.

Mesnel explained to Drapers’ Record that, “The association with the English rugby team is a perfect way to help grow the brand in the UK. I want to improve the position of Eden Park to a high-level casualwear brand over here.”

Let’s forget about our English heritage then, shall we? After all, we only invented the game of rugby, and supplied the original inspiration for sporty, college-style casual clothing. Yes, we all know Ralph Lauren has successfully cornered the the preppy market, and newcomers like Abercrombie and Fitch have muscled in on the scene… But, until recently, the French offering was largely confined to the amusingly quaint Old England store in the boulevard des Capucines. 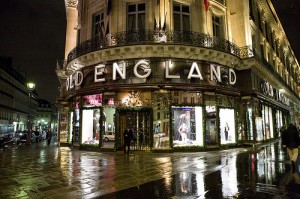 Could this be an opportunity for France to draw upon its legendary fashion flair and give England a thorough bruising off the field? Or is Monsieur Mesnel just indulging his own far-fetched fashion fantasy?

Take a look at some examples from the current collections on offer (as modelled by sportingly duffed-up, non-domiciled dreamboats)

– and let me know what you think… retro-progressive, or ridiculous?