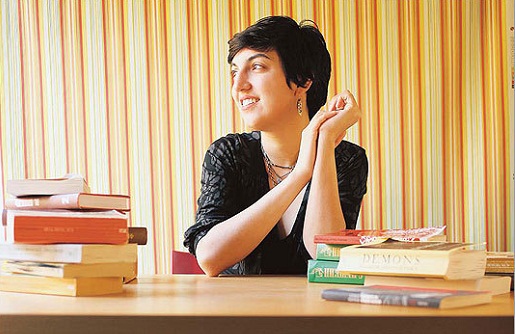 My online research suggests that any review of Elif Batuman’s remarkable book The Possessed: Adventures with Russian Books and the People who Read Them  must open with the reviewer musing on how to categorise it, before settling, uncomfortably, on ‘memoir’. And who am I to blow against the wind?

Let’s start with Elif’s own explanation of her underlying intentions, from the Introduction:

What if you read [Balzac’s] Lost Illusions and, instead of … living in a garret, self-publishing your poetry, writing book reviews, and having love affairs – instead of living your own version of Lost Illusions, in order to someday write the same novel for twenty-first century America – what if you instead went to Balzac’s house and Madame Hanska’s estate, read every word he ever wrote, dug up every last thing you could about him – and then started writing?

That is the idea behind this book.

Does that help you understand The Possessed? No, me neither, and I’ve read it. This is a very unusual book indeed: a haphazard non-linear dash through one woman’s youth, travels, career and unsatisfactory love-life; viewed, sort-of, through the prism of the great Russian novels. Plus a fairly detailed account of the Ice Palace built by Anna Ioannovna, niece of Peter the Great. I suppose I’ll have to follow the herd and settle, uncomfortably, on ‘memoir’, but we Dabblers will have an advantage in getting to grips with it because the reading experience is not at all dissimilar to following a personal blog, where themes and obsessions recur throughout posts on quite different topics, and a blogger might reveal aspects of herself in a haphazard, non-linear, dashing style. Elif is indeed a blogger – and like many bloggers, she is obsessed by two things: reading books, and writing about herself. That, I would suggest, is the simplest explanation of how her book came to be.

But whatever it is, The Possessed is extremely funny. The two academic conferences in California and Russia (for Isaac Babel and Tolstoy scholars respectively) are sublime comedies; Batuman has a gift for sketching memorable eccentrics in a few deadpan lines, and the dialogue, all inexplicable non-sequiturs and awkward miscommunication, wouldn’t be out of place in a Wes Anderson movie like The Royal Tenenbaums.

She’s frighteningly smart, as well as funny. Every page is rammed with crap-cutting insight, most literary-based, some human folly-based, many based on both. How’s this for a take-down of the product of creative-writing courses?…

What did craft ever have to say about the world, the human condition, or the search for meaning? All it had were its negative dictates: “Show, don’t tell”; “Murder your darlings”; “Omit needless words.” As if writing were a matter of overcoming bad habits…

…it was the dictate of craft that had pared many of the Best American stories to a nearly unreadable core of brisk verbs and vivid nouns – like entries in a contest to identify as many concrete entities as possible, in the fewest possible words. The first sentences were crammed with so many specificities, exceptions, subverted expectations, and minor collisions that one half expected to learn they were acrostics, or had been written without using the letter e…. Often, they answered the “five Ws and one H”.

…For example: “The morning after her granddaughter’s frantic phone call, Lorraine skipped her usual coffee session at the Limestone Diner and drove out to the accident scene instead”; “Graves had been sick for three days when, on the long, straight highway between Mazar and Kunduz, a dark blue truck coming toward them shed its rear wheel in a spray of orange-yellow sparks.”

The final section is an incongruity amongst incongruities: effectively an essay providing a literary criticism of Dostoevsky’s  novel Demons (aka The Possessed). Frankly I couldn’t make head nor tail of it. I’ve always loathed literary criticism – in fact I dropped Eng Lit at university and switched to Philosophy because it seemed to me that literary criticism was for people who wanted to pretentiously name-drop philosophers in their writings and, indeed, conversation, without actually bothering to find out what those philosophers said. But had I met Elif or someone like her (could there be anyone else like her?) I might well have felt differently, because she obviously digs it and she’s considerably smarter than I am.  Strangely, none of the other online reviewers of The Possessed seem prepared to admit that Elif Batuman is smarter than they are, though it’s obviously true. 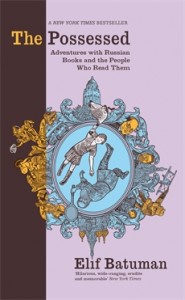 Win a copy of The Possessed

Courtesy of Granta, we have two hardback copies of Elif Batuman’s The Possessed to give away to members of the Dabbler Book Club. If you are already a member you will automatically be entered into the draw so you don’t have to do anything.

You will be entered into the  draw and also be automatically entered into the free Dabbler Book Club, giving you the chance to get hold of monthly free books and other good stuff – see more information and Ts & Cs here.

The draw will take place on Monday 6 June. Good luck!

Ts &Cs: All entrants will automatically be entered into the Dabbler Book Club. This means that you will receive occasonal emails from us about the next monthly book and other offers. However, we will not pass your details on to any third party and you can unsubscribe at any time by emailing editorial@thedabbler.co.uk and requesting to be unsubscribed. Winners will be drawn at random from the Dabbler Book Club members at 5pm on Monday 6 June 2011. The judges’ decision is final. The Dabbler reserves the right to offer an alternative prize or to offer no prize and withdraw the competition at any time for any reason. More competitions are available at Free UK Competitions

11 thoughts on “Review: The Possessed by Elif Batuman – plus, win a copy”