Did you catch a glimpse of a truly horrible painting in the BBC’s And Then There Were None?…

I thought the BBC’s adaptation of And Then There Were None, shown over Christmas, was excellent – it successfully brought to the screen the sick imagination of its author. The mind of Agatha Christie must surely be one of the most twisted this country has ever produced.

Unlike most Christie television adaptations, And Then There Were None was devoid of cosiness. Also justice, redemption and indeed any sort of virtue or light at all – just like the original novel.

I liked the unnerving direction, I liked the creepy flashbacks, and I liked the swearing, which was a better modernizing device than setting the story in the present day, where you get into all sorts of plot problems like having to explain why nobody has their mobile phone handy (Sherlock did pretty well on this until it fell in love with its own cleverness in the shark-jumping latest episode). I can see period setting-plus-swearing being a successful new approach for Agatha Christie adaptations: in the 2010s it’s near impossible to believe somebody is truly frightened if their strongest expletive is ‘Dash it all’. And after all, real people did say ‘fuck’ in the 1930s.

One tiny detail which demonstrated the quality of And Then There Were None was the placement, in the hall of the house of death, of Mark Gertier’s 1916 painting Merry-Go-Round. 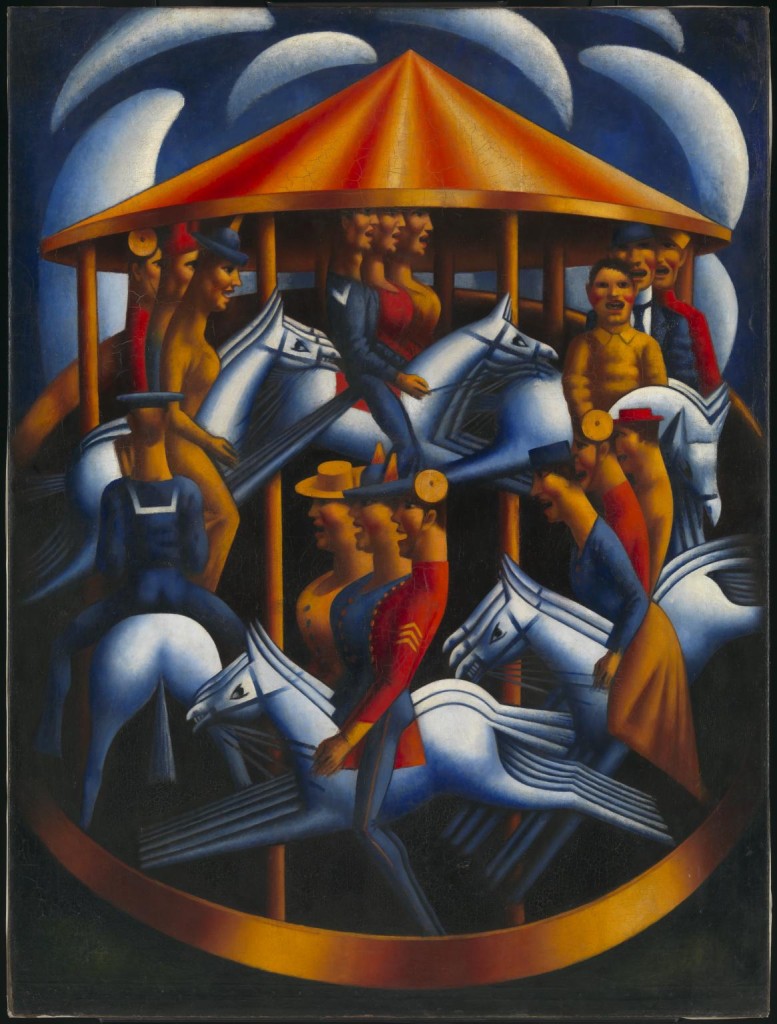 The original painting hangs in British art’s own chamber of horrors, Room 1910 at Tate Britain, which has also housed such nasty pieces as Jacob Epstein’s The Visitation, Edward Burra’s The Snack Bar and Stanley Spencer’s The Resurrection, Cookham.

On seeing the painting, Gertier’s friend D H Lawrence wrote to him about it thus:

Your terrible and dreadful picture has just come. This is the first picture you have ever painted: it is the best modern picture I have seen … I believe there was something in Pompeian art, of this terrible and soul-tearing obscenity … I could sit down and howl beneath it like Kot’s dog, in soul-lacerating despair. I realise how superficial your human relationships must be, what a violent maelstrom of destruction and horror your inner soul must be.

Something similar could be said about the horrible mind of Agatha Christie.