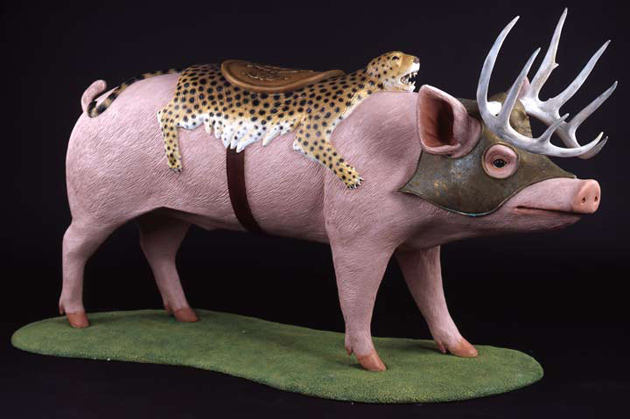 Yet another example of man being thoroughly beastly to pigs. A grisly story from Wikipedia in today’s Wikiworm…

War pigs are pigs reported to have been used in ancient warfare, mostly as a countermeasure against war elephants.

In the first century BC, Lucretius noted that early humans may have attempted to launch wild beasts, such as lions or “savage boars”, against the enemy, but with catastrophic results.

According to legend recounted in the “Alexander Romance” by Pseudo-Callisthenes, Alexander the Great learned about this “secret weapon” against war elephants from Porus in India.

Pliny the Elder reported that “elephants are scared by the smallest squeal of the hog”. Aelian confirmed that elephants were frightened by squealing pigs (and rams with horns), and reported that the Romans exploited squealing pigs (and rams) to repel the war elephants of Pyrrhus in 275 BC. Procopius, in History of the Wars, records that the defenders of Edessa suspended a squealing pig from the walls to frighten away Khosrau’s single siege elephant in the sixth century AD.

Historical accounts of incendiary pigs or flaming pigs were recorded by the military writer Polyaenus and by Aelian. Both writers reported that Antigonus II Gonatas’ siege of Megara in 266 BC was broken when the Megarians doused some pigs with combustible pitch, crude oil or resin, set them alight, and drove them towards the enemy’s massed war elephants. The elephants bolted in terror from the flaming, squealing pigs, often killing great numbers of their own soldiers by trampling them to death.