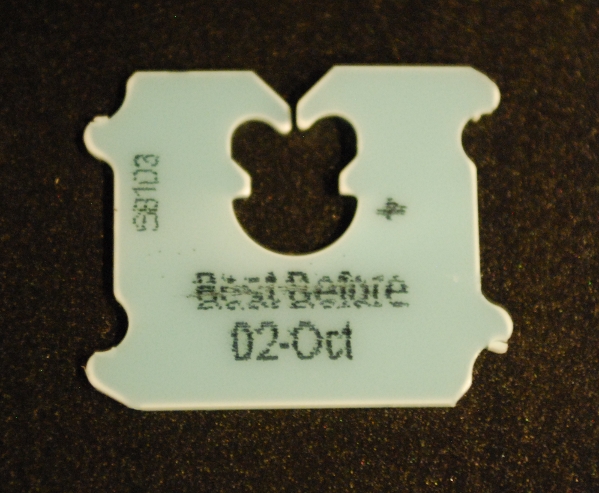 A bread clip is a device used to hold plastic bags closed, such as the ones in which sliced bread is commonly packaged. They are also commonly called bread tags, bread climps, bread tabs, bread ties, or bread-bag clips. The term Occlupanid was coined to describe these devices by group. By sealing a bag more securely than tying or folding over its open end, the clip or tie may preserve its contents longer. In some cases, the color of the tag indicates the day on which it was baked, although there is no universal standard for the color code.

There are two different types of bread clips—the common one-piece plastic clip, and a more complex mechanical clip. One particular design of bread clip is the subject of a patent in the United States.

Most designs of bread clip consist of a single plastic part through which the neck of a plastic bag can be threaded. Because these bread clamps, or bread tabs, are cheap, ubiquitous, and come in a variety of shapes and colors, some people collect them.

The bread clip was invented by Floyd G. Paxton and manufactured by the Kwik Lok Corporation, based in Yakima, Washington. Paxton was known for repeatedly telling the story about how he came up with the idea of the bread clip. As he recounted, he was flying home on an airliner in 1952 and opened a bag of peanuts, whereupon he realised he had no way to reclose it. He rummaged through his wallet and found an expired credit card and hand-carved his first bag clip with his small pen knife. When a fruit packer, Pacific Fruit, wanted to replace rubber bands with a better bag closure for its new plastic bags, Paxton remembered his bag of peanuts. He hand-whittled another clip from a small sheet of Plexiglas. With an order in hand for a million clips, Paxton designed a die-cut machine to produce the clips at high speed. Despite repeated attempts, Paxton never won a United States patent for his clips. He did win numerous patents for the high-speed “bag closing apparatus” that made the clips, inserted bread into bags and applied the clips for the finished product.

Due to their variety of colors and the resultant clicking noise, British children would often use bread clips as ad hoc bicycle spoke clips.