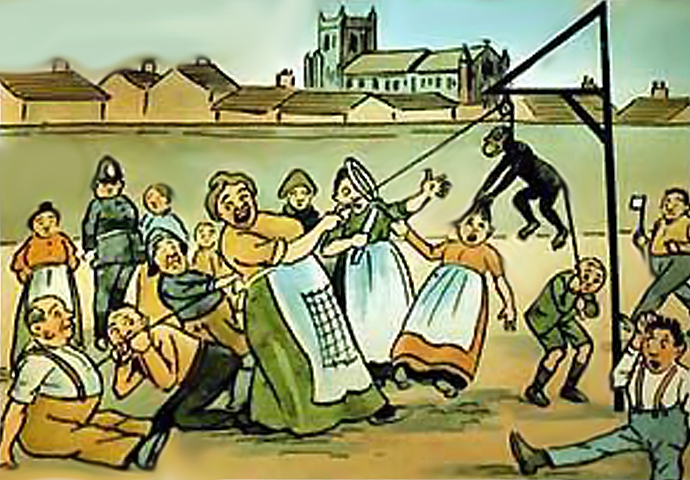 Is it possible to mistake a boy for a monkey? Apparently so according to today’s weird Wikipedia article, unearthed by the Wikiworm…

“Monkey hanger” is a term by which Hartlepudlians are often known.

According to local folklore, the term originates from an incident in which a monkey was hanged in Hartlepool, England. During the Napoleonic Wars, a French ship was wrecked off the coast of Hartlepool. The only survivor was a monkey, allegedly wearing a French uniform to provide amusement for the crew. On finding the monkey, some locals decided to hold an impromptu trial on the beach; since the monkey was unable to answer their questions and because they had seen neither a monkey nor a Frenchman before, they concluded that the monkey was in fact a French spy. Being found guilty, the animal was duly sentenced to death and hanged on the beach. The vertical part of the ship’s mast he was hanged from is still visible on the beach between the Pilot pier and the Heugh.

An alternative theory is put forward alongside the above on the “This Is Hartlepool” town guide.

It states: “Then there are some who point to a much darker interpretation of the yarn. They say that the creature that was hanged might not have been a monkey at all; it could have been a young boy. After all, the term powder-monkey was commonly used in those times for the children employed on warships to prime the cannon with gunpowder.”

However, the earliest mention of the hanging is from the popular song, written and performed by 19th century comic performer, Ned Corvan, “The Monkey Song”. Given that “only after Corvan’s appearances in Hartlepool is there strong evidence for the development of the Monkey story”, the song seems the most plausible origin for the myth.

An earlier and remarkably similar monkey-hanging legend with a similar associated song refers to the inhabitants of Boddam, Aberdeenshire. With similar lyrics and scansion (“And the Boddamers hung the Monkey, O”) it is plausible that Ned Corvan heard and adapted the song while travelling the Scottish Lowlands.

The local football club, Hartlepool United F.C., capitalised on their “Monkey Hangers”nickname by creating a mascot called “H’Angus the Monkey” in 1999. One wearer of the monkey suit called Stuart Drummond unexpectedly became the first directly elected mayor of Hartlepool in 2002 while in the guise of H’Angus, but was forbidden from wearing the costume while in office.

One thought on “Monkey Hanger”